The objective of this study was to assess whether dogs suff ering from small intestinal diarrhoea due to small intestinal bacterial overgrowth or antibiotic responsive diarrhoea would benefi t from a combination of Purina Veterinary Diets® EN Gastroenteric® Canine Formula and Purina Veterinary Diets® FortiFlora® Canine Probiotic Nutritional Supplement (Enterococcus faecium SF68®). The study involved twenty-six adult dogs presenting with symptoms compatible with chronic small intestinal diarrhoea that could not be attributed to any specifi c cause. The dogs were randomly divided into two groups: A (EN Gastroenteric plus FortiFlora sachet) and B (EN Gastroenteric plus placebo sachet). Reassessment of symptoms was scheduled every seven days over a 20-day period. Faeces were characterised based on their consistency. Biochemical and haematological parameters of all dogs participating in the study were within normal limits throughout the entire study period. During the fi rst week of the study, no statistically signifi cant diff erences were found between groups A and B in the characteristics of the diarrhoea. After a 14-day period, comparisons between groups showed that there was a statistically signifi cant diff erence (p = 0.0002) regarding resolution of diarrhoea in group A. During the third week of administration, group A maintained the positive outcome (p = 0.0001).

The aetiology of small intestine diarrheal syndromes in dogs may remain unclear, lead- ing the clinician to provide symptomatic treatment. A common clinical entity in dogs is small intestinal bacterial overgrowth (SIBO), with chronic diarrhoea being the sole symptom in some cases.1 A syndrome with analogous clinical manifestation is antibiotic responsive diarrhoea (ARD). To date, there are no diagnostic techniques that can provide an aetiological diagnosis for either of the above clinical entities.2

SIBO is defi ned as the abnormal increase of bacteria in the lumen of the duodenum and especially in the jejunum.3,4 A number of 104 -105 bacteria and 108 per ml of normal small intestinal contents are found in the dog and cat respectively. Bacterial overgrowth is characterised by both an increase in the number of normal microfl ora and a similar increase of bacteria not found in healthy subjects. The latter has been associated with other diseases.1 Conversely, an increase in the number of bacteria with no implication of pathogenic disease is characterised as idiopathic, primary or ARD. The latter occurs mostly in large breed dogs, especially in German Shepherds.2 Aff ected dogs present diarrhoea, weight loss, flatulence and anorexia as a result of Vitamin B12 defi ciency. Diarrhoea is usually characterised by pasty texture, bad odour and the presence of excess fat in the faeces (steatorrhoea). Dogs may periodically vomit.1 The appetite remains normal or increased, while some animals may present signs of pica or coprophagy.

In cases where clinical examination reveals no other indications as to the origin of diarrhoea (such as weakness or very marked weight loss, pica and /or coprophagy, poor hair coat condition), and the results of biochemical and haematological examination shows no evidence of a serious disorder, the clinician often prescribes symptomatic treatment and dietary modification. 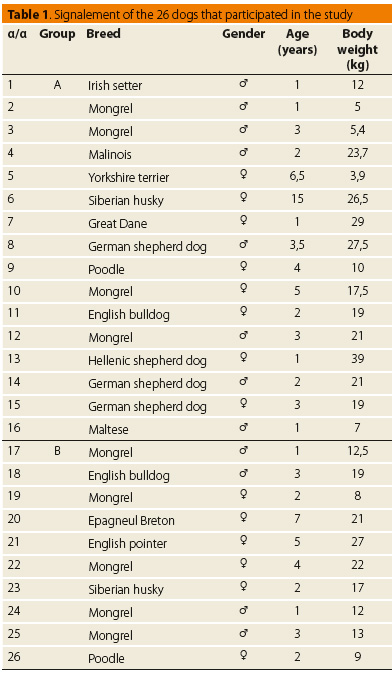 Twenty-six adult dogs were included in the study all of whom were presented to the Companion Animal Clinic of the School of Veterinary Medicine, Faculty of Health Sciences, Aristotle University of Thessaloniki displaying sympsymptoms compatible with chronic small intestinal diarrhoea at least 15 days prior to admission. Owners had habitually fed their dogs with either a commercial dry dog food or a combination of dry food and homemade meals. Signalment of all dogs enrolled in the study is presented in Table 1.

All dogs with clinical findings compatible with SIBO and ARD were included in the study, and were allocated to group A or B. Group allocation was random, and the clinician responsible for the clinical evaluation was unaware of the dog’s group throughout the whole study period.

Dogs in group B were fed with the same clinical diet as group A and a placebo sachet for a 20-day period. The placebo sachet contained the same ingredients as FortiFlora® mix without Enterococcus faecium SF68®.

Prior to enrolment, all dogs underwent a serology test (Snap Giardia test, IDEXX Laboratories) and faecal examination for Giardia spp. and cytology smears prepared by swab samples taken from the rectal mucosal surface for the detection of Cryptosporidium.

Faeces were characterised based on their consistency according to the Nestlé Purina Faecal Scoring System, modified by the authors for the purposes of the study:5

Any dog that presented with faecal scoring paste + or more was considered to have diarrhoea.

Comparisons of the clinical parameters between groups A and B were performed with Fisher’s exact test using the statistical package SPSS 17.0. The level of significance was set at 5% (p <0.05).

Biochemical and haematological parameters of all dogs participating in the study were within normal limits, throughout the entire study period. Serology, faecal examination and cytology from the rectum for Giardia spp. and Cryptosporidium, respectively, were negative in all dogs.

Dogs in both groups were adults of various breeds (Table 1) that presented with small intestinal diarrhoea (frequency, quantity per voiding, odour, and consistency). None of the animals in both groups presented with vomiting, fever or melena. The duration of diarrhoea ranged from 7 to 20 days. At admission, the owners of all dogs were willing to proceed with symptomatic treatment and dietary measures before moving on to a more sophisticated laboratory investigation of the chronic diarrhoea. This further investigation is necessary in cases of recurrence. The dogs were randomly divided into two groups (clinical symptoms and laboratory evaluations were identical for all dogs participating in the study).

During the first week of the study, no statistically significant differences were found between groups A and B in terms of the characteristics of the diarrhoea. However, in 6/16 dogs in group A, the diarrhoea completely resolved, whereas none of the animals in group B showed any improvement in this regard. Comparisons between groups A and B showed that there was a statistically significant difference (p = 0.0002) in the resolution of diarrhoea (after a 14-day period) in group A whose diet was supplemented with FortiFlora® in contrast to group B who received the placebo sachet. During the third week of administration, group A maintained the positive outcome achieved during the second week of the study (p = 0.0001). Faecal scores over time for all dogs in both groups are presented in Table 2.

The cause of small intestinal chronic diarrhoea in the dog, despite a thorough clinical and laboratory examination, may remain unclear. In this study, dogs with chronic small intestinal diarrhoea and primary aetiology suspected as SIBO or ARD were entered into a placebo-controlled clinical trial to determine whether symptomatic relief could be achieved by feeding them a highly digestible diet indicated for intestinal disorders (Purina Veterinary Diets® EN Gastroenteric ® Canine Formula) in combination with the probiotic Enterococcus faecium SF68® (FortiFlora®).

The results of biochemical and haematological evaluation of both groups of animals were within normal limits.

Regarding the aetiology of diarrhoea, only assumptions can be made. It is known that large breed dogs, and especially German Shepherds, may suffer from chronic diarrhoea as a consequence of a clinical entity characterised as ARD.6,7 In this clinical study, there were 6/16 large breed dogs (3 German Shepherds, 1 Hellenic shepherd, 1 Malinois, and 1 Great Dane) in group A. For the rest of the dogs in groups A and B, it can be alleged that although the primary cause was not detected at this stage, they suffered from SIBO. Progress of the relevant cases showed that bacterial overgrowth did not seem to be associated with severe intestinal diseases (e.g. inflammatory bowel disease, villous atrophy, intestinal lymphoma, lymphangiectasia, etc.) or exocrine pancreatic insufficiency.

The combined administration of a clinical diet specifically designed for intestinal disorders (Purina Veterinary Diets® EN Gastroenteric®) offers high digestibility, which promotes high nutrient absorption and helps minimise the dietary load on the compromised gut; it also contains the prebiotic inulin, which improves microbial balance by stimulating the growth of beneficial bacteria, and the probiotic Enterococcus faecium SF68® (FortiFlora®, Purina). This diet is proven to promote intestinal health and balance, and was effective as symptomatic treatment in helping to relieve chronic diarrhoea in the dogs in group A.

Purina Veterinary Diets® EN Gastroenteric®is a highly digestible diet which contains the proven prebiotic inulin (shown to improve microbial balance by stimulating the growth of beneficial bacteria). Probiotics (like SF68®) have been proven to be safe and eff ective in regulating microbiota balance, gastrointestinal and systemic immune functioning in healthy cats and dogs.7,8,9,10 Entercoccus faecium SF68® (NCIMB10415) is a probiotic with proven effectiveness against diarrhoea.11,12,13 SF68® has a shorter replication time, is more stable at acidic pH, and has a more inhibitory action against pathogenic E.coli growth in vitro compared to the probiotic Lactobacillus acidophilus. In addition, SF68® was found to be safe and well-tolerated at 500 times its therapeutic dose in pigs. Although the composition of Purina Veterinary Diets® EN Gastroenteric® is appropriate for the nutritional management of disorders of the gastrointestinal tract, our results suggest it may act complementary to FortiFlora® with excellent results. According to our results, and taking into account that 6/16 dogs in group A were large breed dogs that are more prone to microfl ora imbalances, FortiFlora® could help to resolve diarrhoea quicker. As mentioned, inulin is the prebiotic source contained in EN Gastroenteric®. Previous studies have demonstrated that inulin and Enterococcus faecium SF® display complementary characteristics14 and the combination of inulin with Enterococcus faecium SF® improves the survival of the latter in the intestinal tract.15

The immune system plays an important role in preventing the adherence of inappropriate bacteria to enterocytes, with secretory IgA playing a particularly signifi cant role.16 In a previous study with dogs supplemented with the probiotic Enterococcus faecium (SF68®), faecal IgA levels were shown to increase.17 Given that the dogs entered in this study were likely to have been suffering from SIBO, the positive eff ects of FortiFlora® on the resolution of diarrhoea may have been mediated by a modulation of gut immunological responses. The lack of effect of Purina Veterinary Diets® EN Gastroenteric® alone in this particular study may relate to the specifi c condition of SIBO; and our results indicate that a highly digestible gastrointestinal diet in combination with a proven probiotic such as FortiFlora® (SF68®) could be considered for nutritional management of this disorder.

FortiFlora® contains guaranteed levels of viable microorganisms (minimum 1x108 CFU/g SF68®), a level proven to promote intestinal health and balance.15 According to our experience and that of other authors,18 the minimum daily per os dose should be at least 1x108 CFU/unit.

Duration of usage may run into months for chronic diarrhea due to the presence inflammatory bowel disease.10

According to the results of our study, probiotics may act synergistically to a clinical diet specific for gastrointestinal disorders and help alleviate diarrhoea which is not associated with severe enteropathy or exocrine pancreatic insufficiency.