The aim of this study was to assess whether brachycephalic dogs are more prone to develop gastro-esophageal reflux (GOR) during anaesthesia. Brachycephalic airway syndrome is a common pathologic condition that affects dogs with certain anatomical abnormalities of the upper airway. Specifically, brachycephalic dogs may present stenotic nares, hypoplastic trachea and other secondary changes such as everted laryngeal saccules, redundant oropharyngeal soft tissue and laryngeal collapse. These conditions increase the negative intrathoracic pressure and provoke GOR, which causes oesophagitis, oesophageal stenosis and aspiration pneumonia. However, during anaesthesia, many factors, like anaesthetic drugs or the patient’s body position, can increase the likelihood of GOR. Data were retrieved from the U.S. National Library of Medicine (PubMed) and the Mendeley databases. All data were evaluated and only articles, relevant and meeting the inclusion criteria, were kept for processing. The majority of 310 articles was related to GOR during anaesthesia in companion animals; some of them took into consideration such an event in dog population, but only two, recently published articles, considered the brachycephalic sub-population. According to these two articles, brachycephalic dogs (symptomatic or not) did not show a higher tendency to GOR during anaesthesia, in comparison to non-brachycephalic dogs. The prevalence of GOR in brachycephalic dogs is an issue that has drawn the attention of research in the last years. This systematic review suggests that, actually, there is not enough evidence to support an increased likelihood of GOR in brachycephalic dogs compared with non-brachycephalic ones, since more specifically targeted studies and a larger population must be examined, in order to allow such a conclusion.

Gastroesophageal reflux (GOR) is a frequent complication during anaesthetic procedures, due to reduction of the lower oesophageal sphincter (LOS) tone, caused by anaesthetic drugs. The reflux of gastric content (acid reflux), or a mixture of gastric and duodenal content (non-acid), into the lumen of the oesophagus can cause severe oesophagitis, oesophageal stricture and aspiration pneumonia (Grimm et al. 2015). Studies conducted on a mixed population of anaesthetised dogs reveals that the incidence of GOR may vary from 4.8% (Anagnostou et al. 2009) to 55% (Wilson et al. 2005) depending on the age, the size of the animal (Anagnostou et al. 2017), the position during surgery, the type of surgical procedure (Galatos & Raptopoulos 1995), and the drugs used for premedication (Galatos & Raptopoulos 1995, Wilson et al. 2005), induction (Raptopoulos & Galatos 1997) and maintenance (Wilson et al. 2006) of anaesthesia. It is known that brachycephalic dogs, affected by obstructive respiratory syndrome, show a high prevalence of hiatal hernia and GOR, due to the violent inspiratory effort that induces an abnormally low negative intrathoracic pressure, and consequently a cranial displacement of digestive structures or their content (Lecoindre & Richard 2004). Due to these abnormalities of the brachycephalic respiratory system, it is of key importance to detect if there is a higher predisposition for GOR during anaesthesia and take appropriate preventing measures.

With the database research, a total number of 310 papers was found. The duplicates and the papers that were not relevant were removed, and finally only two articles, that fulfilled the inclusion criteria, were used (Figure 1). Both studies are randomized controlled clinical trials and have been published recently. The first one was published on Jan/Feb 2017 in the Journal of the American Animal Hospital Association, by Shaver et al., and the second one on January 2017 in Veterinary Anesthesia and Analgesia, by Anagnostou et al. 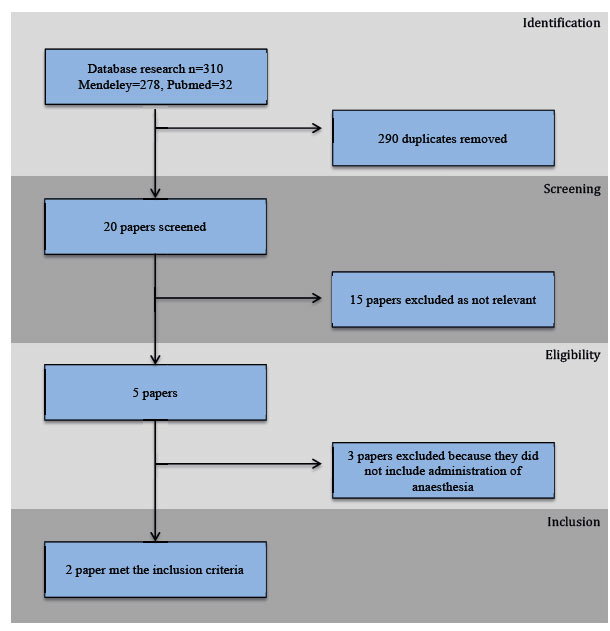 The aim of the first study (Shaver et al. 2017) was to investigate if brachycephalic airway syndrome can predispose to GOR during anaesthesia. It evaluated and compared the prevalence of GOR (acidic and basic), the duration and the onset of GOR in two groups of dogs. Group 1 (cases) was represented by 20 dogs with confi rmed partial upper airway obstruction, presenting for surgical correction of this pathologic condition, to which a “brachycephalic grade” was given, while group 2 (controls) included 20 non-brachycephalic dogs, with no partial obstruction aff ecting the upper airway, based on history and physical examina- tion, that were undergoing other elective surgery. Subjects were excluded if the thorax or abdomen were opened during the operation, if there was any mast cell tumour (in their history, or currently), if there was evidence of substantial organ dysfunction, or if the dog was receiving steroidal or non-steroidal anti-inflammatory, prokinetic or gastric pH modifying drugs. All dogs included in this study received a standardized anaesthetic protocol of midazolam (0.1 mg kg-1), hydromorphone (0.2 mg kg-1) and atropine (0.02 mg kg-1) IM as premedication, induction with propofol (5-7 mg kg-1 IV) and maintenance of anaesthesia with isoflurane in 100% oxygen following intubation. GOR was documented by continuous monitoring of the oesophageal pH during anaesthesia, through a probe positioned close to the LOS. Data were compared between groups with a Student’s t test for parametric data and with a Mann-Whitney U test for non-parametric data. GOR was detected in 20/40 (50%) of dogs, 12/20 (60%) of cases and 8/20 (40%) of control dogs. Acidic GOR was found in 12/40 dogs (8 brachycephalic, 4 control), basic GOR in 6/40 dogs (3 brachycephalic, 3 control) and both acidic and basic GOR in 2/40 dogs (1 brachycephalic, 1 control). Non-significant differences between the percentage of brachycephalic and control dogs that had acidic (p=0.32), basic (p=1.0), or any GOR (p=0.34) were observed. The duration of any kind of GOR in brachycephalic dogs was non-significantly different between the case (median 47.5 min, range 3-195) and control groups (median 32.5 min, range 5-150) (p=0.18). The onset of GOR was non-significantly different between case (median 10 min, range 5-125) and control groups (median 12.5 min, range 5-125) (p=0.6). The authors specify that, based on a post-hoc power analysis, a sample of at least 97 dogs is required to detect a difference between case and control groups with any kind of GOR.

According to both studies, GOR is a common pathologic condition in dogs during anaesthesia and it seems that brachycephalic breeds are not more prone to GOR than non-brachycephalic. However, in the first study, as demonstrated by a post-hoc power analysis, the sample size taken into consideration was small, while a sample of at least 97 animals would be necessary in order to affirm the difference between dogs with brachycephalic airway syndrome and control ones. Additionally, this study does not take into consideration the position of the patient during the surgical procedure, which can play an important role. The second study does not differentiate symptomatic brachycephalic dogs from non-symptomatic and compares only the incidence of GOR in sternal recumbency. Another limitation of this study is that the duration of anaesthesia was different between the two groups examined but, according to the authors, this is not a factor that could influence the results of the study, since GOR developed within the first hour of anaesthesia.

It is accepted that GOR frequently occurs dogs during anaesthesia. A lot of factors play an important role in the development of this pathologic condition, such as the age of the patient, the position during surgery, the surgical procedure, the anaesthetic protocol and the duration of anaesthesia. It is still not clear if the particular conformation of the respiratory system of brachycephalic dogs can represent a predisposing factor to GOR. During the last years the prevalence of GOR in brachycephalic breeds is a subject of research, but the bibliography relative to this subject is still poor. According to these two recent studies (Shaver et al. 2017, Anagnostou et al. 2017), brachycephalic dogs are not more predisposed to GOR during anaesthesia, but additional and more targeted studies are required for conclusive results. Newer studies should examine a larger population, take into consideration other body positions during surgery, or other impact factors, and differentiate symptomatic brachycephalic dogs (affected by partial upper airway obstruction) from asymptomatic ones.

The authors declare no conflicts of interest.

Corresponding author:
Giulia Polidoro
e-mail: This email address is being protected from spambots. You need JavaScript enabled to view it.