Gastric dilatation during sedation in a Doberman with intranasal malignancy

A 7–year–old Doberman pincher dog was presented for the second scheduled chemotherapy session due to intranasal squamous cell carcinoma. The dog was sedated with dexmedetomidine and butorphanol due to an aggressive behaviour. During sedation, the patient was presented with gastric dilatation which was confirmed radiographically. Emergency gastric decompression was performed and following the stabilization of the patient, chemotherapy was administered. The dog recovered uneventfully.

Rapid accumulation of gas in the stomach could lead to gastric dilatation (GD) with or without malposition. Rotation of the dilated stomach has been described in dogs as Gastric Dilation–Volvulus (GDV) syndrome (Monnet 2003). Acute GD and GDV constitute life–threatening conditions, as the dilated stomach compromises normal ventilation and compresses caudal vena cava leading to cardiovascular shock and collapse (Tivers & Brockman 2009).

The aetiology and pathophysiology of the GDV syndrome is not yet completely understood. However, investigation and understanding of the potential risk factors could contribute to the syndrome prevention. To date, many dietary, environmental and canine specific risk factors have been identified, with the most important being: breed predisposition, large and giant breeds (Glickman et al. 2000a, Glickman et al. 2000b), food ingredients (Raghavan et al. 2006) and consumption of large quantity of food once daily (Glickman et al. 2000b, Raghavan et al. 2004), older age (Elwood 1998, Theyse et al. 1998), having a first degree relative with a history of GDV (Glickman et al. 2000a), gastric foreign body (de Battisti et al. 2012), pre-existing inflammatory bowel disease (Braun et al. 1996), and history of splenectomy (Sartor et al. 2013). Aggression and fearfulness (Pipan et al. 2012) as well as aerophagia (Elwood 1998) have also been associated with an increased risk of GDV.

The purpose of the present report was to describe history, signalment, clinical signs and physical examination findings, diagnosis, treatment and follow up of a dog that showed gastric dilatation during sedation for chemotherapy administration for the management of intranasal malignancy.

On the appointment for the second chemotherapy, the dog appeared bright and alert. The dog had been fasted for 12 hours. Body weight was 28 kg with a body condition score of 4/9. Epistaxis had resolved over the previous 10 days. Physical examination was not possible because of an aggressive behaviour. Tachypnoea and mild inspiratory dyspnoea were noticed, without signs of discomfort. Sedation was performed for clinical examination and chemotherapy.

The dog was manually restrained by the owner and a combination of dexmedetomidine (Dexdomitor, Orion Pharma, Finland) at 180 μg m-2 and butorphanol (Dolorex, MSD, Greece) at 0.1 mg kg-1 were administered intramuscularly (IM). Blood samples were obtained for complete blood count analysis. During transport to the oncological unit, distention of the cranial abdomen was noticed. Abdominal palpation revealed tympany and a tentative diagnosis of GD was made. The distention progressed rapidly, the dog became dyspnoeic, so it was transferred to the Intensive Care Unit (ICU) for treatment.

A large bore (16G) intravenous catheter (Introcan, Braun, Germany) was placed in the right cephalic vein and intravenous fluid administration (Lactated Ringer’s, DEMO, Greece) commenced at a rate of 10 ml kg-1 h-1 to prevent hypovolaemia, due to compressed vessels and therefore reduced venous return and fluid maldistribution. The dog was prepared for emergency gastric decompression. An orogastric tube could not be passed under this level of sedation, so gastrocentesis was performed. The left lateral abdominal wall was clipped and aseptically prepared. An 18–gauge needle was inserted caudally to the last rib, at the point of the maximum tympany of the left flank region. Decompression of the stomach was partially achieved.

A right lateral abdominal radiograph was obtained to evaluate gastric content and presence of volvulus. Radiographic examination revealed gas and food accumulation into the gastric lumen without any evidence of gastric rotation (Figure 1). 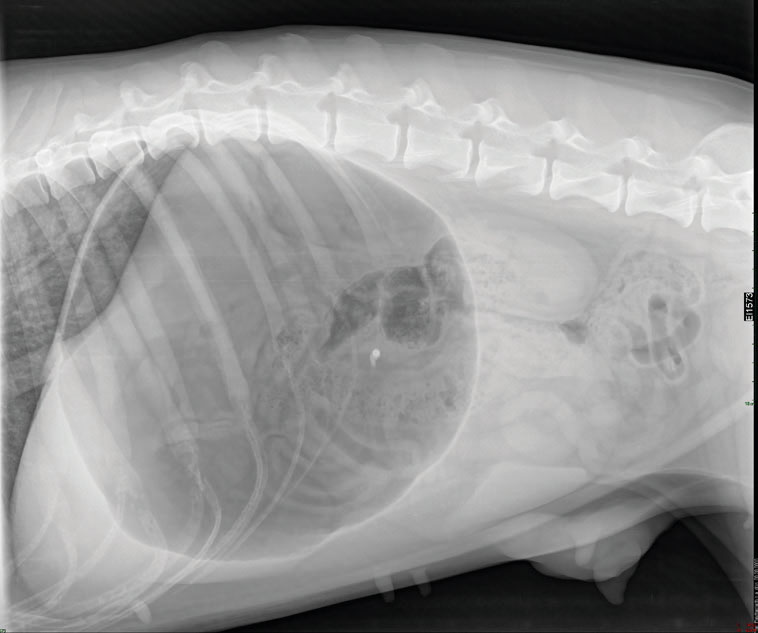 Figure 1. Right lateral abdominal radiograph of the dog with gastric dilatation during sedation. The stomach appears gas distended.
There is no evidence of gastric rotation.

The length of a large bore silicone tube was measured from the nose tip to the last rib and marked. The tube was lubricated with sterile gel and passed through the mouth into the stomach. Gas and fluids escaped through the tube. Warm water lavage was performed three times to completely evacuate the stomach from food content. No blood was noted in the ingesta. In view of the poor prognosis associated with the intranasal malignancy prophylactic gastropexy was declined by the owner.

After stabilization, carboplatin was administered at 275 mg m-2 IV and inhalational anaesthesia was discontinued. Metoclopramide (Primperan, Sanofi-Aventis, France) at 0.4 mg kg-1 subcutaneously (SC) and ranitidine (Lumaren, Elpen, Greece) at 2 mg kg-1 SC were given for their prokinetic/ antiemetic properties and decreases the stomach acid properties, respectively. Dexmedetomidine was reversed with 0.75 mg atipamezole (Alzane, Zoetis, Greece) IM. The patient recovered uneventfully and was discharged from the clinic with metoclopramide at a dose of 0.3 mg kg-1 every 8 hours and ranitidine at 2 mg kg-1 twice a day orally for 3 weeks. The dog was put on a clinical diet (Gastrointestinal, Royal Canine, France) and restriction of physical activity was advised for 3 months. Re-examination of the patient 3 and 6 weeks post GD episode yielded normal gastrointestinal function and improvement of the signs of the malignancy. The patient was sedated both times with the same protocol as above and proceeded to the third and fourth scheduled chemotherapy sessions without complications.

The patient in our case experienced an incidence of gastric dilatation while under sedation. The dog’s breed (Doberman pincher) (Glickman at al. 2000b, Bell 2014) and age group (elder dog, 7 years old) (Theyse et al. 1998) have been found to be overpresented for GDV. Large amounts of dry food are considered dietary risk factors for the development of GDV. However, our dog has not been fed a large amount of dry food and the last meal 12 hours prior to presentation consisted of commercial canned food and boiled rice (Raghavan et al. 2004).

In cases where normal eructation and/or pyloric outflow are compromised, gastric dilatation could occur following or followed by volvulus (Tivers & Brockman 2009). In this case, gastric dilatation occurred 20 min post dexmedetomidine and butorphanol administration. In a previous study in rats (Asai et al. 1997), dexmedetomidine has been found to exert a weak inhibitory effect on gastric emptying. Butorphanol seemed to facilitate pyloric sphincter relaxation in isoflurane anesthetized dogs undergoing duodenal endoscopy (McFadzean et al. 2017). It is therefore unlikely that these sedative agents significantly compromised the gastric outflow and caused GD. To the authors’ knowledge there is no evidence yet to support that sedative or general anaesthetic agents could increase the risk for GDV in the dog.

Savas et al. (2001), have reported a case of gastric dilatation in a dog recovering from tiletamine/ zolazepam anaesthesia. However, aerophagia that occurred from central nervous system excitation during recovery, was considered the cause of gastric distention. Aerophagia was considered a possible risk factor in this case. It has been disputed as a cause of GDV by some authors (Van Kruiningen et al. 2013), but suggested as a significant risk factor by others (Bredal 1998, Elwood 1998). A previous experimental study has shown that nasal obstruction could cause aerophagia (Nakajima & Ohi 1977). In a more recent study (Bredal 1998), it was concluded that nasal mite infection increases the risk for GDV in predisposed dogs, due to aerophagia. In our case, it is likely that partial nasal obstruction due to malignancy, caused aerophagia and predisposed to GD.

Aggression (Glickman et al., 2000b), anxiety (Pipan et al. 2012) and stressful events including automobile journey (Elwood 1998) and veterinarian visits (Glickman et al. 2000a) have also been considered as important risk factors for GDV. The patient of this case was very aggressive, and she had travelled 3 hours by car before the admission to the clinic.

Except from the day that GD occurred, the patient had visited the clinic 5 times in total (2 before and 3 after the GD episode). In all these visits the dog travelled by car for 3 hours to arrive to the clinic and she was sedated with the same protocol. General anaesthesia was given for diagnostic investigations only once. Each time the dog was fasted for 12 hours and the last meal was always the same as above. A possible explanation about why GD occurred at the second session is the size and the pattern of the intranasal malignancy lesions, resulting in upper airway obstruction and aerophagia. At the subsequent sessions, neoplastic lesions subsided, and dyspnoea was reduced.

In conclusion, in the present case, the most likely cause for the development of GD in the dog seemed to be aerophagia associated with nasal obstruction due to neoplastic disease. Clinical signs of GD resolved following decompression and dietary restriction.

The authors declare no conflicts of interest.

Corresponding author:
Evmorfia Totta
e-mail: This email address is being protected from spambots. You need JavaScript enabled to view it.