The combination of α2-adrenergic agonists with opioids provides good sedation and analgesia in clinical practice. Much lower doses of an α2-agonist may attain these effects when combined with opioids, because of the synergistic actions of the two agents. To our knowledge, this is the first systematic review, which evaluates the cardiorespiratory effects of dexmedetomidine combined with butorphanol in cats. The authors searched for relevant literature in PubMed, Google Scholar and Scopus using keywords. The exclusion of non-relevant studies to the topic under investigation lead to 9 eligible abstracts for critical evaluation. Studies, which did not evaluate two or more cardiorespiratory parameters, were excluded from the systematic review, resulting in two articles finally being included for analysis. The two studies were assessed for bias based on specific aspects. Specifically, the random sequence generation as well as the study design in regard to blindness of participants and objective outcome evaluation, were analysed. Both articles were categorized as of moderate/strong quality. Six factors were identified as influenced by this drug combination. These factors were: heart rate, respiratory rate, arterial blood pressure, oxygen saturation (SpO2), capillary refill time and colour of mucous membranes. The limitations of this study are the small sample size of the included articles and the inability to search published literature in languages other than English. All procedures in these studies were non-surgical. The combination of dexmedetomidine with butorphanol resulted in a decrease of heart rate and blood pressure. The respiratory rate was reduced significantly in one study but remained similar to the baseline in the other. Mean SpO2 did not differ significantly from baseline. Further studies are required in order to draw safe conclusions.

α2-Adrenergic agonists are commonly used for sedation in feline medicine. They provide profound sedation, analgesia as well as muscle relaxation. One of the major advantages of these agents is the reversal of their effects by selective antagonists (e.g. atipamezole). Nonetheless, they have significant side effects like decreased heart rate and cardiac output, increased peripheral vascular resistance, respiratory depression and vomiting (Sinclair 2003).

Butorphanol is a synthetic opioid, with κ-agonistic and μ-antagonistic effects (Commiskey et al. 2005). Being not listed among controlled substances, it is often preferred over more potent opioid derivatives, due to ease of access. After intramuscular administration in cats, the thermal nociceptive threshold is decreased and a brief variable analgesic effect is produced (Lascelles & Robertson 2004, Johnson et al. 2007). The combination of dexmedetomidine with butorphanol provides a deeper sedation and greater muscle relaxation, whereas dexmedetomidine alone has a more rapid onset of recumbency in experimental cats (Selmi et al. 2003).

With this systematic review we aimed to assess the current evidence on cardiovascular and respiratory effects of dexmedetomidine combined with butorphanol in cats. To our knowledge this is the first systematic review evaluating the effects of this particular combination of drugs in cats.

The study selection was focused on the combination of dexmedetomidine with butorphanol excluding any other α2-agonists or opioids. In addition, only cardiorespiratory parameters were studied without including sedation or any other effects of these drugs combined. Nine full-text articles were evaluated by two reviewers independently, using exclusion criteria. Discordant results among the two reviewers were discussed with the senior researcher in the team. The rating was related to study design and data analysis and categorised as poor, moderate, or strong. Data were processed after agreed criteria developed, utilizing a computer programme (Review Manager 5.3, Copenhagen: The Nordic Cochrane Centre, The Cochrane Collaboration) to assess study design, data collection and analysis method, results and discussion. 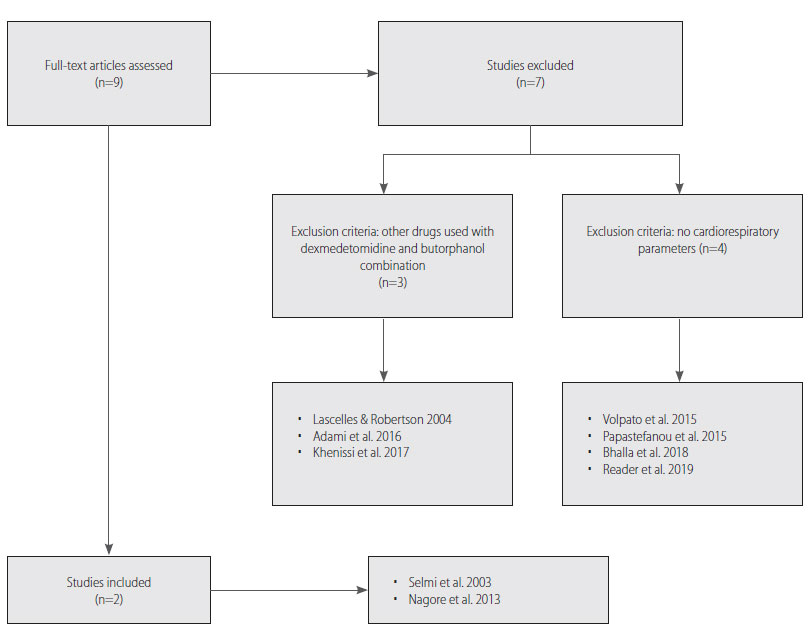 In the second study, “Sedative effects of dexmedetomidine, dexmedetomidine-pethidine and dexmedetomidine-butorphanol in cats” (Nagore et al. 2013) 30 Domestic Short-Hair cats were included, 15 of which were females and 15 males. Their age ranged from 1 to 8 years and their weight between 1.3 and 5.2 kg (2.3±1.1 kg). All cats were of physical status ASA I. By utilizing a multifactorial scale, the following parameters were compared: quality of sedation, muscle relaxation, analgesia and muscle relaxation. The cats were randomly allocated to 3 groups (10 cats each). The animals of the first group received dexmedetomidine (20 μg kg-1 IM), the animals of the second one received dexmedetomidine (10 μg kg-1 IM) and pethidine (2.5 mg kg-1 IM), and of the last one dexmedetomidine (10 μg kg-1 IM) and butorphanol (0.4 mg kg-1 IM). In all groups there was an increasing sedation effect, as well as analgesia and muscle relaxation. As far as RT is concerned, there was a decrease in dexmedetomidine-butorphanol treatment group. Regarding HR, there was a reduction in the dexmedetomidine-butorphanol group (94±14 min-1) compared with baseline measurements (108±26 min-1) 5 minutes after treatment. There was no significant change in RR compared to baseline (40-44 min-1) in any group. Capillary refill time (CRT), pulse and colour of mucous membranes also showed no differences among the three groups. The cats in all groups were presented with a greater pallor of mucous membranes, 5 min after they were sedated in comparison to the baseline, but it was resolved 15 minutes after the intervention. On the other hand, pulse and the CRT remained unchanged in comparison to baseline during the whole procedure.

To our knowledge this is the first systematic review in veterinary medicine assessing the effects of dexmedetomidine with butorphanol on the cardiovascular and respiratory system in cats. The final number of studies that were included in our review were two. Although both studies were similar in design and population, it is obvious that the small sample of articles included, is not adequate in order to draw a safe conclusion. Most studies, related to dexmedetomidine- butorphanol, are examining the sedation effects of the drugs without reporting cardiovascular parameter values. Thus, the size of included studies is very limited.

The purpose of both studies was not solely to investigate the cardiorespiratory effects of dexmedetomidine- butorphanol but also to evaluate the sedation effect of this drug combination. The main parameters assessed in both studies were HR, RR, SpO2 and non-invasive blood pressures. Further cardiovascular parameters requiring more invasive techniques, like cardiac output, direct arterial blood pressures or central venous pressure were not evaluated. Two cardiorespiratory factors were in common in both studies (HR and RR). HR was decreased significantly in both, while RR decreased in the first study (Selmi et al. 2003), and it did not alter significantly in the second one (Nagore et al. 2013).

The level of selection and performance bias in both studies is relatively low, taking into account that the first article (Selmi et al. 2003), is a randomized crossover study and the second one (Nagore et al. 2013), a prospective randomized blind study. Even though there are limitations in both studies, these are not mentioned by the authors. The first study (Selmi et al. 2003) has a very small sample size, while the second one (Nagore et al. 2013) does not include other cardiovascular parameters other than HR and RR.

The major limitation of this systematic review is the small number of studies included. PubMed database was searched, as it covers a great proportion of veterinary literature. In addition, a search was conducted in Google Scholar and Scopus without any new addition of articles. The authors cannot exclude the possibility that more studies exist which were not included in this systematic review. Articles under evaluation were limited to English language only.

It is concluded that treatment using dexmedetomidine and butorphanol leads to a profound reduction in HR as well as in arterial blood oressure. RR decreased significantly in one study but did not change in the other one. Mean SpO2 did not differ significantly from baseline. Regarding the CRT and colour of mucous membranes there was no noticeable alteration. Overall, there is limited evidence, in both quantity and quality, that highlights the need for future research studies regarding the cardiorespiratory effects of dexmedetomidine-butorphanol combination. In the authors’ opinion, this drug combination is recommended in clinical practice for rather minor surgical procedures and further investigation is required in order to draw safe conclusions about its cardiorespiratory effects.

The authors declared no conflicts of interest.

Corresponding author:
Konstantinos Varkoulis
e-mail: This email address is being protected from spambots. You need JavaScript enabled to view it.