A 6-year-old, sexually intact female Brittany spaniel dog was admitted for further investigation and treatment of anorexia and lethargy. Thoracic radiographs revealed a markedly globoid cardiac silhouette, compatible with pericardial effusion. Echocardiographic examination demonstrated a thickened pericardium and a large volume of effusion leading to cardiac tamponade. Cytology of the pericardial effusion obtained by pericardiocentesis was compatible with neutrophilic inflammation. Inoculation of the obtained fluid was negative. A subtotal pericardiectomy was performed under isoflurane anaesthesia. Histopathology of the excised pericardium was compatible with fibrinopurulent pericarditis. The exact cause of pericardial effusion could not be determined. Two years after surgery the dog was in good clinical condition and free of clinical signs. This is a unique case of fibrinopurulent pericarditis in a small breed dog with an unknown aetiology, that was successfully treated with pericardiectomy.

A 6-year-old intact female Brittany spaniel, weighing 10 kg, was referred to the Companion Animal Clinic of the Aristotle University of Thessaloniki for further investigation and treatment of anorexia and depression. The dog had an outdoor lifestyle and a history of impetigo that was treated in the Unit of Dermatology of our Clinic with oral cefuroxime (20 mg kg-1 every 12 hours for 4 weeks) 3 weeks before admission. On presentation, the dog was lethargic and had a body condition score of 3/5. Clinical examination revealed respiratory distress, hypothermia (rectal temperature 37.5°C), tachycardia (140 min-1), muffled heart sounds on auscultation, pale mucous membranes and a capillary refill time of less than 2 sec.

Figure 1. Thoracic radiographs of the dog depicting an enlarged globoid cardiac silhouette (arrows) compatible with pericardial effusion on lateral (A) and ventrodorsal (B) views. 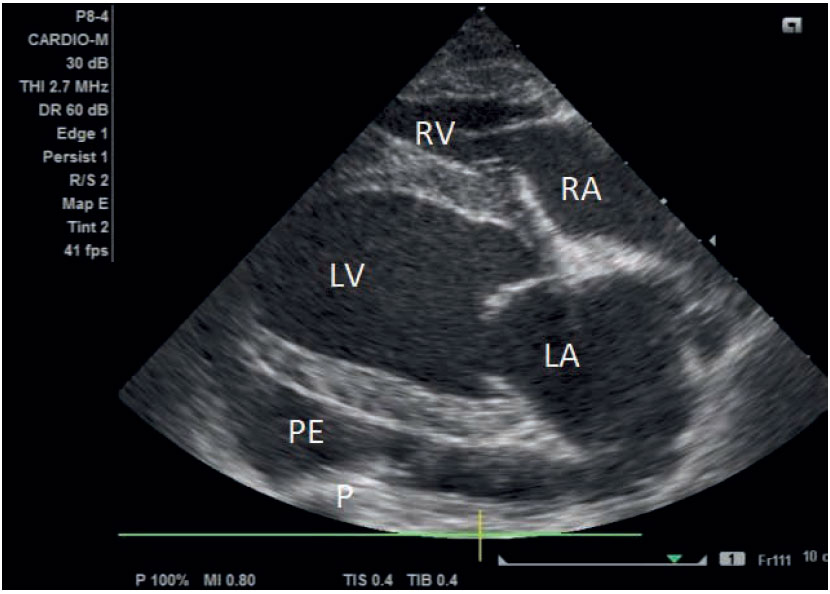 A pericardiocentesis, under echocardiograph ic guidance, was performed, through the 4th intercostal space, with the animal placed in left lateral recumbency. For the procedure, a 16G intravenous over the needle catheter connected to a three-way stop cock valve was used. Approximately 250 ml of cloudy yellowish and highly viscous fluid was drained from the pericardial sac. Echocardiographic examination performed after the pericardiocentesis showed that the amount of fluid in the pericardium was significantly decreased. Cardiac diastolic parameters returned to normal and chamber dimensions increased. At the same time, based on the inflow profile of the tricuspid valve and the normalization of the chamber dimensions, constrictive pericarditis was ruled out. However, right ventricular wall thickness remained increased throughout the study period. Systolic arterial blood pressure was 140-150 mmHg in repeated measurements following perciardiocentesis. Echocardiographic parameters evaluated in our case are presented in Table 1. 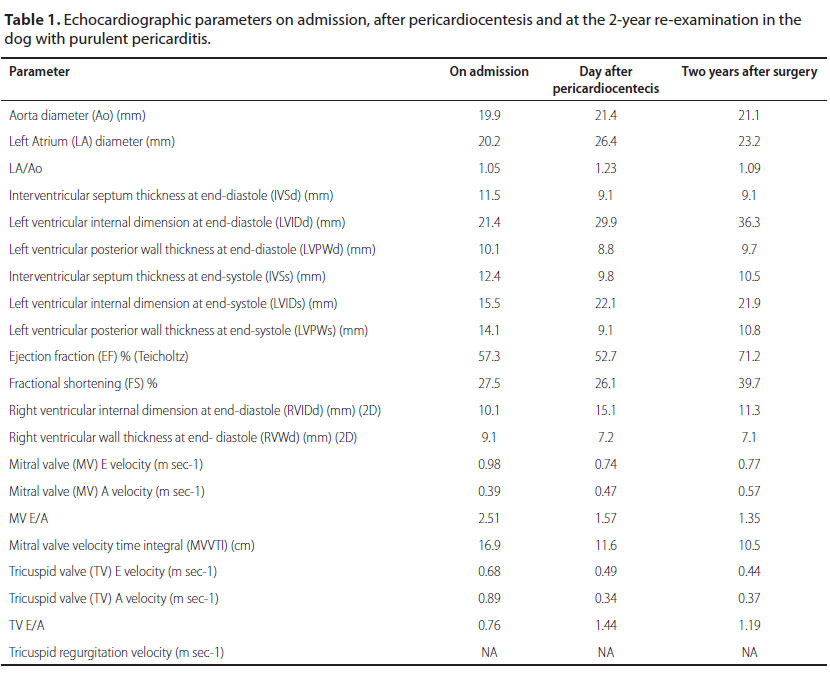 An echocardiographic examination performed 3 days after the initial pericardiocentesis revealed the reappearance of large volume of pericardial effusion and relapse of the cardiac tamponade. In order to manage the returning effusion, pericardiectomy was performed. 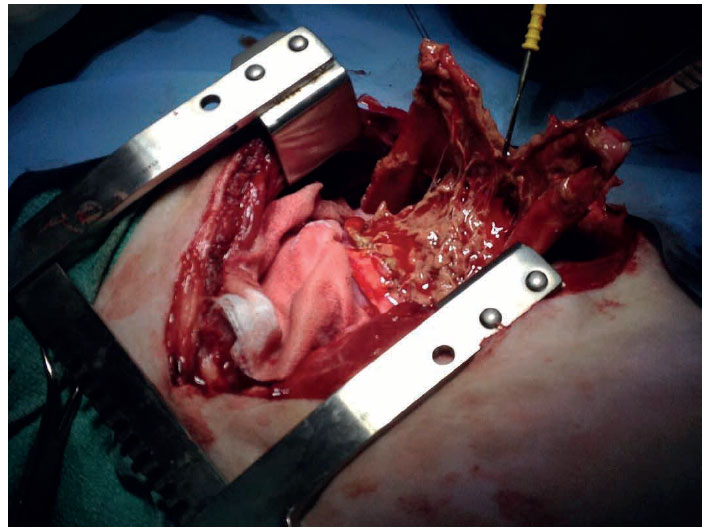 Figure 3. Intraoperative view of the heart of the dog, following pericardial incision. Fibrin is shown to adhere between the two layers of the pericardium. Heart base is on the left and head of the dog is on the top. 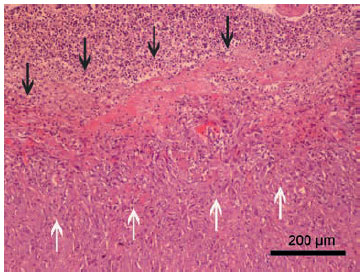 Histopathologic examination of the excised tissue confirmed severe pericardial thickening. The inner layers were necrotic and replaced by fibrin, cellular and nuclear debris and degenerated leukocytes (mainly neutrophils). Necrotic layers were covered by granulation tissue characterized by interlacing fascicles of activated fibroblasts and newly formed capillary vessels. Multifocally and more intensely on the interface between areas of necrosis and granulation tissue there was infiltration by lymphocytes and plasma cells (Figure 4). Based on the histopathologic examination, diagnosis of fibrinopurulent pericarditis without any signs of malignancy was made. Cultures obtained from the pericardial tissue were negative for bacterial organisms.

The dog was re-examined 3 months and 2 years after surgery and found to be in good clinical condition. Echocardiographic parameters two years after surgery remained unchanged. Due to lack of tricuspid or pulmonary valve regurgitation, Doppler estimation of pulmonary arterial pressure was not applicable. Systolic arterial pressure was 140-150 mmHg in the follow-up consult using the HDO method.

Clinical signs and physical examination findings reported in the dog of our study were compatible with those reported by others (Berg & Wingfield 1984, Fuentes et al. 1991, Aronson & Gregory 1995, Johnson et al. 2004). Most of the clinical findings could be associated with the pericardial effusion. Severity of clinical signs are related to the rate and magnitude of fluid collection (Aronson & Gregory 1995). Presence of a large volume of fluid into the pericardial sac leads to cardiac tamponade and cardiac function will be affected in case of cardiac compression (Monnet 2018). In the present case, the presence of cardiac tamponade was clinically manifested by tachycardia and muffled heart sounds. Hepatic congestion and elevated liver enzymes were secondary to the onset of right heart failure because of cardiac tamponade (Wagner et al. 2006).

Anaemia reported in the dog of the present study was attributed to chronic disease (Fuentes et al. 1991, Aronson & Gregory 1995), whereas hypoalbuminaemia has been associated with congestive heart failure or effusions into body cavities, among other causes, and is not specific for pericardial effusion (Johnson et al. 2004).

Documented causes of purulent pericardial effusions in dogs may be caused by migrating foreign bodies, gunshot injuries, bite wounds or micro-organisms (Fisher & Thompson 1971, Chastain et al. 1974, Fuentes et al. 1991, Aronson & Gregory 1995). In a study of 5 dogs with infectious pericarditis, grass awns were removed in only 2 of the dogs (Aronson & Gregory 1995). The cause of purulent pericardial effusion and pericarditis could not be identified in the dog of the present study. However, the possibility of a grass awn migration cannot be ruled out as our dog lived outdoors in an area where grass awns are commonly identified. Mixed microbial infections are commonly cultured from dogs with infectious pericardial effusions associated with foreign bodies (Aronson & Gregory 1995).

Pericardial effusion in dogs can be successfully managed with pericardiocentesis or pericardiectomy (Berg & Wingfield 1984, Fuentes et al. 1991, Aronson & Gregory 1995, Aronsohn & Carpenter 1999, Johnson et al. 2004). Subtotal pericardiectomy decreases the pericardial surface area, diminishes fluid production and increases the absorptive surface area by allowing fluid to accumulate into the pleural cavity (Monnet 2018). Subtotal pericardiectomy also allows for obtaining tissue samples for histopathology, culture and sensitivity tests (Monnet 2018). In our study we performed intercostal thoracotomy subtotal pericardiectomy, ventral to the phrenic nerves, to remove septic pericardium and fibrin adhered to the parietal pericardium, search for a foreign body and obtain tissues for culture and sensitivity testing. Prior antibiotic treatment for skin disease, that was recently discontinued in our dog, may have resulted in false-negative cytology and culture of the pericardial fluid and pericardium, respectively (Beco et al. 2013, Mastora et al. 2018, Singh & Weese 2018). In the present study, the diagnosis of purulent pericarditis, with no evidence of bacteria, was based on histopathologic examination of the excised pericardium, which was consistent with findings compatible with severe fibrinopurulent pericarditis (Fuentes et al. 1991, Aronson & Gregory 1995, Johnson et al. 2003). In contrast, histopathologic examination of idiopathic pericarditis is characterized by pericardial thickening, fibrosis, haemorrhage and mild inflammatory reaction (Aronsohn & Carpenter 1999). Despite the negative cultures, we decided to proceed with empirical antimicrobial treatment, based on severe inflammatory reaction, degenerated leucocytes, necrosis and fibrin deposition as shown in our histopathology findings and findings reported by others (Aronson & Gregory 1995). Subtotal pericardiectomy and antimicrobial treatment achieved resolution of clinical signs after a follow-up period of 2 years.

Unique features of the case presented here include a fibrinopurulent pericarditis in a small breed dog with an unknown causative factor. Cardiac ultrasound revealed pericardial effusion with several tentacle-like, linear and irregular hyperechoic densities compatible with fibrin. No bacteria were isolated from the pericardial fluid possibly due to previous antibiotic treatment for pyoderma. The dog underwent a subtotal pericardiectomy and empirical antibiotic treatment and found to be free of clinical signs of cardiac disease after a long follow-up time of 2 years. Histopathologic examination of the excised pericardium confirmed the diagnosis of fibrinopurulent pericarditis.