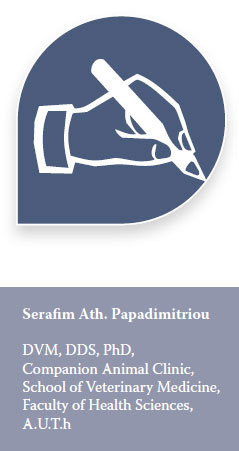 The present editorial was drawn up with regard to the publication of guidelines for veterinary dentistry, issued by the World Small Animal Veterinary Association (WSAVA). It is a document of major importance, covering 165 pages. The Hellenic Companion Animal Veterinary Society took the initiative to translate the guidelines into the Greek language, with a view to distributing the document to its members in the 10th anniversary Forum in March 2019.

Historically, dentistry in veterinary medicine seems to have been applied in equidae several centuries B. C. There has also been some reference to the treatment of dental problems and the attempt to determine the age of equidae since the sixth century B.C. in China. It seems that the ancient Greeks conquered the estimation of a horse’s age based on tooth growth. In the fifth century B.C., Simon of Athens, in his book “The Veterinary art, inspection of horses” referred to the age when teeth tend to erupt in horses, as well as the way to estimate their age based on their dentition. Subsequently, in 333 B.C., Aristotle in his book “History of Animals”, gave an account on periodontal disease in horses. The baton was taken by the Romans, who managed to develop significantly the dental medicine in equidae.

In the modern age, the key figure of Companion Animal Dentistry was Joseph Bodingbauer who distinguished himself in the 1930s in Vienna, while in the USA this particular field of science started to develop relatively recently, especially, after 1970. Specifically, Companion Animal Dentistry (CAD) was recognised as a separate specialty of Veterinary Medicine in the USA in 1988, after the establishment of the American Veterinary Dentistry College (AVDC) and in Europe in 1998 when the European Veterinary Dentistry College (EVDC) was founded. The first time that veterinary dentistry was established as a separate department was at the School of Veterinary Medicine at the University of Pennsylvania (U-Penn) in Philadelphia, USA in 1970s, with Dr. Colin Harvey, Professor of Surgery, being the leading figure in this endeavour. The development of Companion Animal Dentistry has been rapid over the last two decades and, according to many authors, dental, oral and maxillofacial diseases are among the most common medical conditions confronted in companion animal veterinary medicine. In North America and Europe, a significant part of the revenues of a veterinary office comes from the Companion Animal Dentistry.

Within the framework of the CAD, veterinarians combat cases of periodontal disease, which is the most common medical condition in dogs and cats, dental fractures (that are possible to be treated not only by means of extraction, but also with restoration, root canal therapy and metal crowns), inflammatory diseases of the oral cavity, orthodontic problems leading to traumatic occlusion, fractures of the mandible, neoplasms of the oral cavity, oro-nasal fistula, etc.

As stressed in the WSAVA global guidelines, dental and oral diseases cause great pain, as well as local and systemic infections. For the aforementioned reasons, it is considered that, in case dental diseases cannot be cured or they are undertreated, the animal’s welfare is compromised. The guidelines also include an extensive reference to the disastrous effects caused by the application of dental procedures without anaesthesia (anaesthesia-free, AFD or non-anaesthetic dentistry, NAD), which is definitely ineffective or even harmful. Another point of interest is the negative effect of undiagnosed or/and uncured dental diseases on the animal’s health, as well as the way they are associated with the well-being of animals.