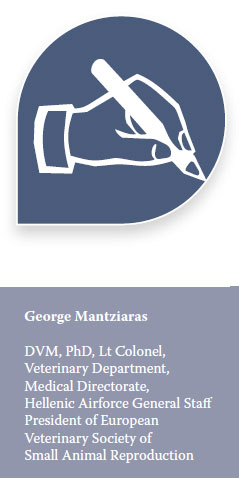 Military Veterinary Medicine is inextricably linked with the history of the modern veterinary science. In 1774, just 13 years after the establishment of the First School of Veterinary Medicine in Lyon, the first veterinarians were appointed in the French Army. In Greece, the first veterinarian, the Bavarian Georg Horsch, emerged in 1833 and within the next years (1844), the first Greek Veterinary Officers became widely known, such as Emmanouel Pyllas and Nikolaos Kordikas, with the latter writing in 1853 the first Greek book under the title “Equidae Treatment”. In 1875, Georgios Pilavios was employed by the Greek Army. He is considered as the founder of the Military Veterinary Service.

The main task of military veterinarians was, initially, to provide veterinary services to equidae (the so-called “Equidae Medicine”), while it was just in the early 20st century when the importance of food control was made clear. Since then, the food and water hygiene, the macroscopic, as well as their check in the veterinary laboratories of the Hellenic Army, have been an integral part of the veterinary support provided by the Armed Forces, both inside and outside the borders of the country, for example, in peacekeeping missions. The veterinarians played a decisive role in defending the Public Health through the design and the control of food management and safety systems application in the military units. As far as places of particular health interest is concerned, such as military hospitals and recruits classification centers, these systems are ISO certified.

The year 1989 was a milestone in the Military Veterinary, as the Greek Air Force begins to use military dogs in order to reinforce the defence and guarding of its Units. Today, 29 years later, besides the defence and guarding, these dogs are also used in explosives and drugs detection tasks as rescuers, and as therapy dogs as well. In 1999 the USA started to use specifically trained hawks for the impact reduction of birds on aircrafts. Their healthcare and treatment, the controlled reproduction, as well as the supervision of training and wellbeing processes, were the duties of the military veterinarians.

The modern geopolitical environment that has been created during the 21st century requires the close cooperation between the military veterinarians and the broader public and private sector. Thus, the Armed Forces veterinarians participated in the investigation of the possible environmental impact of the use of depleted uranium in the war in Bosnia, the support of victims of earthquakes, the organisation of the Olympic Games, as well as the food and water control in the hotspots for refugees and immigrants during the recent refugee crisis. Another significant factor has been their contribution to the registration of livestock loss in the disastrous fires in 2008, to dealing with the ruminants’ spongiform encephalopathy, the foot- and –mouth disease, the avian influenza, rabies and, recently, the epizootic smallpox disease of small ruminants in Lesvos. Within the framework of the cooperation with the law enforcement bodies, the military veterinarians provide medical assistant to the dogs of the Hellenic Police, the Fire Service, the Harbour Police Corps and the Ministry of Finance as well.

The subjects of the veterinary support provided by the Armed Forces in the 21st century are more and more complex than ever before. The veterinary officers show particular commitment in carrying out their daily task, not only by just keeping pace with developments, but also by participating actively in them and, often, by leading them!

We are present in all the difficult situations…