Ovarian teratoma with inflammatory components in a bitch

A 2-year-old female mixed breed dog was presented with a history of abdominal distention of 2 month duration. Physical examination revealed a non-painful firm abdominal mass. Diagnostic imaging demonstrated a mid-abdominal mass with numerous mineralized densities. An exploratory coeliotomy revealed a mass associated with the left ovary, which was removed through a complete ovariohysterectomy. Histopathological examination of the mass was compatible with a benign ovarian teratoma with inflammatory components. Three years after surgery the dog was reported to be well.

Primary ovarian tumours occur more commonly in the bitch, mare and cow.1 They account for 1% of all canine tumours and are divided into epithelial, sex-cord gonadal stroma and germ cell tumours.1-3 Germ cell tumours are usually divided into dysgerminomas and teratomas with the latter representing 2% of all canine ovarian tumours.1,2 Ovarian teratomas are rare tumours comprised of tissues of ectodermal, mesodermal or endodermal origin in various combinations of 3 or less layers.1,4 A few reports of canine ovarian teratomas appear in the veterinary literature.2-20 This report describes the imaging, gross and histologic features, treatment and long term outcome of a dog with an ovarian teratoma consisting of infrequent histologic components. 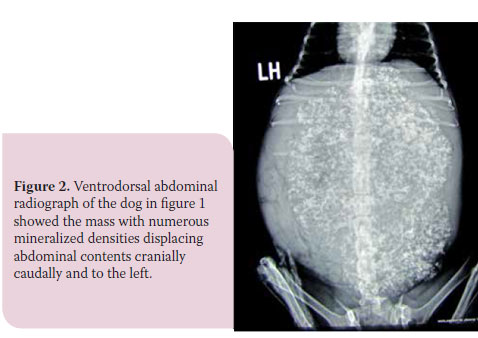 Fine needle aspiration cytology of the mass was non-diagnostic. The dog underwent a midline coeliotomy under isoflurane anaesthesia. At surgery, an irregular mass, 20 x 18 cm weighing 1.6 kg was noticed originating from the left ovary (Figure 4). A total ovariohysterectomy was done and the mass was removed. No gross metastatic foci were found on abdominal exploration. The celiotomy incision was closed routinely and the dog recovered uneventfully from anaesthesia. The dog received morphine and carprofene for 3 days following surgery.

The mass was grey-yellowish in color, macronodular and granular and the cut surface was multicystic with cysts less than 0.5 cm in diameter filled with viscous, gelatinous material (Figure 5).

Specimens were fixed in 10% buffered formalin embedded in paraffin, sectioned in 5 μm and stained with haematoxylin and eosin (HE). Histopathologically the presence of epidermis (keratinized multilayered stratified epithelium), hair follicles (with keratin remnants) adjacent to sebaceous and sweet glands, connective tissue consisting of collagenous fibers and fibroblasts and areas with slightly basophilic/myxomatous material were detected. Large cystic formations lined by pseudostratified epithelium and epithelial cells sloughed into their lumen admixed with neutrophils were also observed. Multiple foci of cartilage were obvious in several sides and less frequently there was bone formation. Furthermore, nervous tissue with neuraxonal degeneration and neuronal degeneration (chromatolysis, vacuolation) /necrosis (nucleolysis), gliosis and small inflammatory cell infiltrations (lymphocytes, macrophages) was evident. Inflammatory cells, mostly lymphocytes, plasmacytes, macrophages and frequently numerous mast cells, were detected in the interstitial connective tissue. Areas with pseudostratified epithelium or only one layer of columnar or cuboidal sometimes ciliary epithelial cells and among them, goblet cells (respiratory epithelium) were noted. The presence of one layer of ependymal-like cuboidal cells with eosinophilic cytoplasm and round nucleus, arranged on a basement membrane and surrounded by loose connective tissue with certain cells forming a lumen was evident (Figure 6). 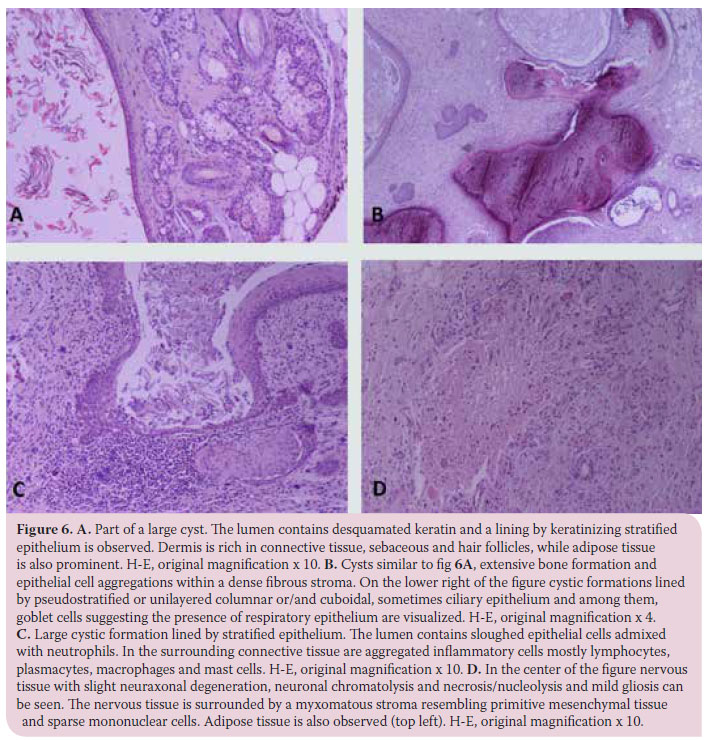 The dog was re-examined 15 days after surgery at suture removal and found in good clinical condition. Diagnostic imaging including thoracic radiography and abdominal ultrasound one year after surgery revealed no abnormalities. Telephone communication with the owner three years after surgery showed that the dog was in good health.

Teratomas occur in dogs of any breed with a median age of 3 years (range 1-12 years).3-20 They also seem to affect young dogs and are characterized by a rapid growth.13,19 Abdominal distention is the most common clinical sign of teratomas, similar to the dog of the present study. Plain abdominal radiography detected a mid-abdominal mass with numerous areas of mineralization a common feature of ovarian teratomas.8,9,11,12,14,19 Differential diagnosis of the mass included mummified fetuses, tumours of the liver, spleen, stomach, pancreas, adrenals, mesentery, fat, uterus, or ovaries; a chronic haematoma or abscess could also be considered as differentials. 9,11,14 The mass of the study presented here could arise from any abdominal structure; however, it does not seem to be retroperitoneal since there was no ventral displacement of the colon. Renomegaly usually results in ventral displacement of the colon. Ovarian neoplasms usually result in medial but not ventral displacement of the duodenum and colon. Abdominal ultrasound can aid in detecting an ovarian mass. Identification is enhanced if the mass size is less than 6 cm.21 In our case although the size of the mass was more than 18 cm it contained hyperechoic shadow casting foci that may allow ultrasound to distinguish it from other ovarian tumours.21 Fine needle aspiration cytology of the aspirates was unremarkable in our case. However, cytological examination was previously shown to have a diagnostic accuracy of 94.7% in certain types of ovarian tumours.22

Ovarian teratomas can be mature, immature or monodermal neoplasms.3-9,12-21 Mature or immature teratomas are embryonic elements derived from one to three germ cell types, whereas monodermal teratomas are derived from the predominant embryonic element within the neoplasm.4 Ovarian teratomas are histologically benign and well- differentiated in 50% of the dogs.4,10 The neoplasm reported here showed the presence of tissue originating from all three germ layers including ectoderm (skin and nervous tissue), mesoderm (bone and cartilage) and endoderm (respiratory epithelium). The histologic components seen in our case consisted of well-differentiated cells and were compatible with a benign teratoma associated with the left ovary; inflammatory infiltration was also evident in the nervous and connective tissue. This inflammatory reaction was reported in another canine ovarian teratoma.13 However, its significance is unknown. This inflammatory reaction simulated by neoplastic inflammatory cells originating from the neoplasm or by normal inflammatory cells against the neoplasm.13 Definitive diagnosis of ovarian teratoma require histologic examination of the mass. Malignant teratomas are rare, share an undifferentiated component and may metastasize in 50% of the dogs.3,10,11

Complete ovariohysterectomy is the definite treatment of localized ovarian teratoma.4,7-9,14 However, unilateral ovariectomy may be considered as an option in case of a localized teratoma with no evidence of gross neoplastic involvement in the remaining of the genital tract or other organs.8,18 In the present case midline coeliotomy and abdominal exploration revealed a mass associated with the left ovary; the rest of the genital tract appeared grossly normal and no further abnormalities were detected in abdominal exploration. In view of the unknown preoperative histologic nature of the mass a complete ovariohysterectomy was done and provided a cure since the neoplasm was benign and the dog was alive 3 years after surgery.

An ovarian teratoma is presented in a young dog with a history of abdominal distention. Abdominal imaging revealed a mid-abdominal mass with areas of mineralization. Exploratory coeliotomy showed that the mass was associated with the left ovary. Histopathologic examination was compatible with a benign ovarian teratoma. Complete ovariohysterectomy was curative and the dog was doing well 3 years after surgery.