Osteoma of the mandible in a cat

A seven-year-old cat was admitted due to dysphagia caused by a mandibular tumor. Upon examination, a round, non-painful, firm mass which was attached to the underlying bone was revealed. Radiography and computed tomography of the mandible were performed. The mass involved the area between the last premolar tooth and the angular process, up to the neck of the condyloid process. Based on the findings of the computed tomography, a tentative diagnosis of a peripheral osteoma was made. Caudal mandibulectomy was performed and the mass was excised en bloc. Histopathological examination confirmed the diagnosis of an osteoma. Recovery was uneventful; the animal was able to eat quite normally a week after surgery and is symptom-free one year later.

Osteoma is a benign bone tumor occurring in the oral and maxillofacial regions. It is composed of mature compact or cancellous bone that grows at a slow rate.1-3 Osteomas may arise on the surface of the bone (periosteum or compact bone), or within the bone (cancellous bone); additionally, in humans it can be described as central or peripheral. Osteomas may also rarely occur in soft tissues (extraskeletal osteomas).1,3 They usually appear as solitary growths, but a multicentric type can also be found.

Aetiology is yet unclarified, however, trauma, infection and developmental anomalies have been implicated.1 It usually first appears as an unusually hard, slow growing mass that is firmly attached to the underlying bone. Clinical evaluation, diagnostic imaging and histopathology should be performed in order to set the diagnosis.1,4,5,6 Diagnostic imaging usually reveals a mass of radiographic density and consistency similar to that of cancellous bone. Definite diagnosis is set after histopathological examination of a biopsy specimen, but a tentative diagnosis can be made based on the clinical and radiographical characteristics of the mass.1,5,7,8

Osteomas occur in all kinds of animals, but have been reported mostly in horses and cattle.1 Only 12 cases of osteomas of the jaws and skull have been reported in cats, with limited information concerning treatment and outcome. Apart from the skull bones, a case involving the spine and another one located in the subcutaneous tissue have been reported.8,9

Purpose of the present study is to describe the clinical, imaging and histological features, treatment and follow-up of a rare case of an osteoma of the mandible in a cat.

A seven-year-old male, British Blue cat was referred to the Companion Animal Clinic, School of Veterinary Medicine, A.U.Th., due to dysphagia caused by a firm mass on the mandible. According to history, the cat had been castrated and all the premolars, molars and the upper left canine had been extracted because of gingivostomatitis four months prior to presentation. A couple of days before admission, the referring veterinarian had noticed a firm growth on the left angular process which exhibited bone consistency on radiographic examination. 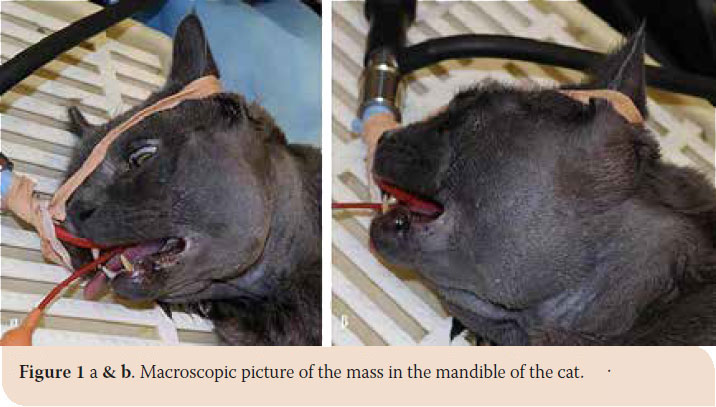 Upon presentation, the clinical examination revealed a round, non-painful, solid mass, firmly attached to the underlying bone (Picture 1 a and b). The mass was palpable through the skin of the left mandible, expanding in the area between the angular process and the middle of the body of the mandible, to the neck of the condyloid process measuring about 4.5 cm x 3.5 cm. It was also palpable through the oral mucosa without signs of erosion. Limited mouth opening was also noticed. Moderate inflammation of the gingiva and the fauces were recorded, reinforcing the diagnosis of chronic gingivostomatitis. The ipsilateral mandibular lymph node was not palpable. 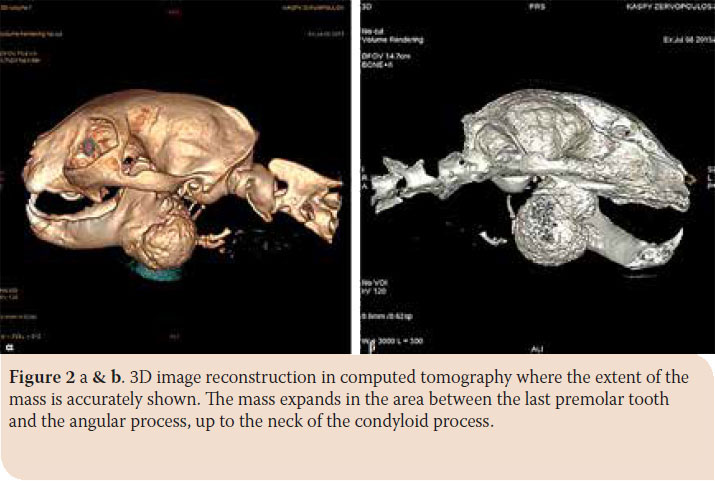 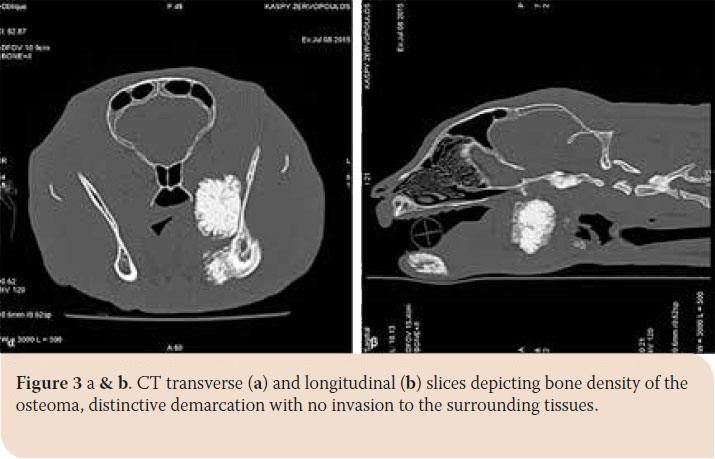 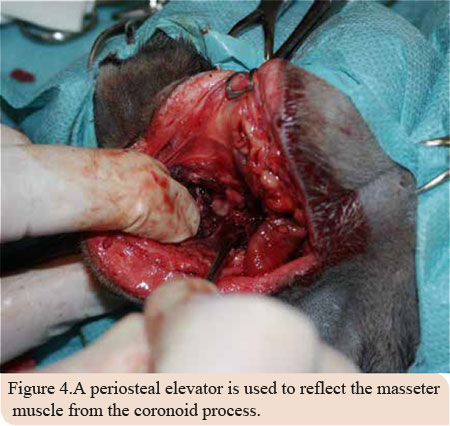 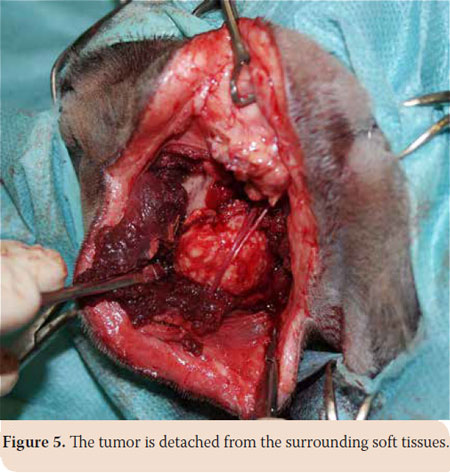 After written consent of the owner, caudal mandibulectomy was performed and the mass was excised en bloc. The animal was placed in right lateral recumbency. The skin, subcutaneous tissue and the fascia of the masseter muscle were incised along the ventral surface of the zygomatic arch. The incision was extended to the angular process up to the upper third of the cervix. The masseter was detached from the coronoid process with a periosteal elevator (Picture 4). Accordingly, the mass was detached from the underlying soft tissues, while the vessels and nerves of the area were preserved (Picture 5). The incision was temporarily closed after checking for signs of active bleeding and a second incision in the mucogingival junction both lingually and buccally was made (Picture 6 a and b). Caudal mandibulectomy was performed with a low-speed handpiece and the mass was removed through the second incision (Picture 7 a, b and c). The oral mucosa was sutured in a simple interrupted pattern, followed by the masseter muscle, subcutaneous tissues and skin which was sutured in an intradermal pattern. A 3/0 absorbable suture was used in all cases (Vicryl®, Ethicon Inc., Cornelia G.A). Clindamycin (11 mg/kg intravenously (iv) every 12 hours (BID) Clindacin®, Incepta Pharmaceuticals Ltd, Bangladesh) and cefuroxime (20 mg/kg iv BID Zetagal®, Elpen Α.Ε., Greece) were administered for 10 days, meloxicam (0.1 mg/kg iv once a day (SID) Novacam®, AST Farma B.V., Netherlands) for 3 days and pethidine hydrochloride (3mg/kg im every 4-6 hours) for 2 days were additionally administered for the pain.

Facial swelling and dysphagia were noticed during the first post operative days. However, recovery was quick, appetite and mood normalized gradually and wound healing was uneventful. The cat was able to eat almost normally a week after surgery.

The excised specimen was submitted for histopathological examination. The specimen was fixed in 10% buffered formalin for 72 hours and then decalcified in formic acid- sodium citrate. Fixed, paraffin-embedded tissue samples were cut in 4- 5-μm-thick sections and stained with hematoxylin and eosin before microscopic examination. The mass consisted of mature lamellar bone with irregularly arranged osteons surrounded by numerous osteoblasts and mild atypia (moderate anisocytosis, normal nucleus-to-cytoplasm ratio, no obvious nucleoli and mitosis). Osteoma of the mandible was diagnosed. 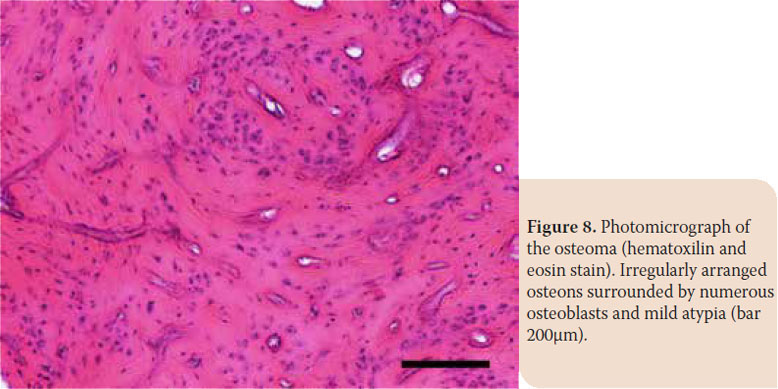 Two months later, the cat was admitted again with an upper lip trauma which was caused by the lower left canine tooth (Picture 9). 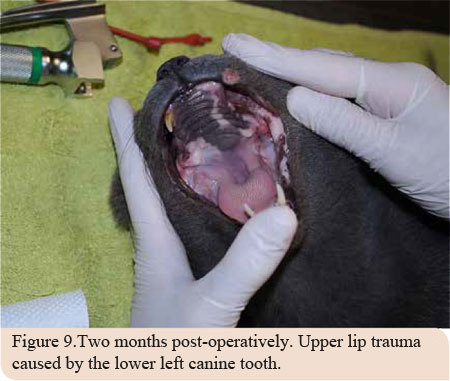 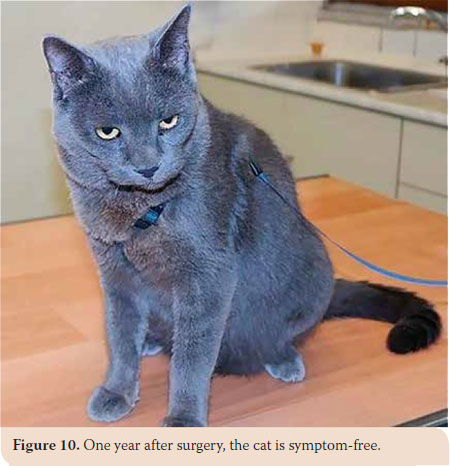 Osteoma of the skull represents a rare benign type of neoplasm in the cat. In human medicine, it is believed that it may be related to developmental anomalies, trauma or inflammation in the area.1,2,3,10,11 In the present case, there was no history of trauma, while there are no reports relating chronic gingivostomatitis to osteoma formation.

There are only a few reported cases of skull osteomas in the cat which seem to be unrelated to age, as the reported age distribution is between 1 and 23 years.1,8,9,12 In contrast to human, where osteomas are primarily peripheral,11 a study conducted in cats, reports same prevalence for the two types.1 In order to accurately define the extent of the lesion and differentiate the type of the osteoma, diagnostic imaging, particularly the computed tomography is of great importance. Computed tomography can provide the clinician with information concerning the composition, the structure and the extent of the mass, while magnetic resonance will reveal potential soft tissue involvement.1,2,8,12 In the reported case, CT examination enabled the surgeons to draw useful information in order to plan surgery. Based on the results of diagnostic imaging, an osteoma was suspected (possibly the peripheral type), but definite diagnosis was set after the histopathological examination was completed.

Differential diagnosis includes mainly osteosarcoma and chondrosarcoma, multilobular osteosarcoma, peripheral odontogenic fibroma (former ossifying epulis), odontogenic tumors and craniomandibular osteopathy.6 Some of the aforementioned conditions (especially the malignant neoplasms) could be differentiated based on their rapid growth rate (only the standard forms).1,7 Finally, differential diagnosis should also include edema, abscess, and hematoma, conditions which exhibit different clinical and imaging characteristics. Histopathological differentiation between osteoma and osteosarcoma is straigthforward as the osteoma exhibits mature lamellar bone without atypia. On the contrary, osteosarcoma is invasive, demonstrates high cellularity and is very pleomorphic with numerous mitoses.6

In most reported cases, the animals were asymptomatic until the mass was noticed by the owner. In the present case, the osteoma was noticed by the owner only when its dimensions were disproportional to the cat’s skull. The only reported symptom was limited mouth opening and dysphagia which could have been partially attributed to the concurrent chronic gingivostomatitis.

The location of the mass, combined with the young age and good condition in spite of the concomitant gingivostomatitis allowed for complete excision. Mandibulectomy and maxilectomy are not performed in the cat as frequently as they are in the dog. Due to the nature of the malignant neoplasms that usually appear in cats and their delayed admission, most of the time they are inoperable.13 The most common complication after mandibulectomy is disruption of normal occlusion, which can lead to soft tissue trauma, because of the shape of the teeth, especially the canines.14 In the present case, upper lip trauma should be attributed to previous extraction of the canine tooth rather than malocclusion. Extraction of the remaining canines resulted in resolution. When oral surgeries are performed, antibiotics are not usually administered since the excellent blood perfusion of the oral cavity enables uncomplicated recovery. However, antibiotics were prescribed in the reported case because the surgical trauma concerning both the oral cavity and neck was extensive and because of the preexisting chronic gingivostomatitis.

Surgical excision of such a voluminous osteoma is very challenging due to the extent and duration of the operation and the need for preserving important anatomic landmarks of the retromandibular space, demanding cautiousness and experience on behalf of the surgeon. In spite of the extended mandibulectomy, the cat responded very well during the postoperative period and has a normal and good quality of life.

Osteoma of the mandible should be included in the differential diagnosis when firm, slow-growing masses are encountered in the area.

Diagnostic imaging, especially computed tomography, add to the diagnosis of osteoma, but definite diagnosis is set after histopathological examination.

Depending on the location of the tumor, surgical removal is the sole treatment, paying attention not to injure important anatomical landmarks of the face and neck.