Diagnosis and surgical treatment of thymoma in the cat

Thymoma is a rare neoplasm seen in aged cats that derives from thymic epithelial cells and is usually located in the cranial mediastinum. Clinical signs include dyspnoea, coughing, anorexia, lethargy or regurgitation. Feline thymoma may also be associated with myasthenia gravis or exfoliative dermatitis. Diagnosis of the tumour is based on diagnostic imaging. Ultrasonography provides information concerning the consistency of the mass. The extent and invasiveness of the mass can only be determined by computed tomography. Cytologic examination can also facilitate diagnosis where thymic epithelial cells and small lymphocytes dominate. Surgery is the treatment of choice for feline thymomas with favourable results. Thymomas are approached through a median sternotomy or intercostal thoracotomy. Definite diagnosis of thymoma can only be confirmed by histopathologic examination. The prognosis of feline thymoma is favourable, providing it is not associated with paraneoplastic syndromes or metastatic disease.

Thymoma is the most common thymic neoplasms that arises from thymic epithelial cells.1-9 Thymomas have been described in cattle, dogs, cats, sheep, goats, horses, pigs and rabbits.3,10 Thymoma and lymphoma represent the most common thymic neoplasms in cats.11-15 Feline thymoma is a rare neoplasm, usually benign and slowly progressive, localised in the cranial mediastinum.3,11,13,16-23 A cervical thymoma arising from an ectopic thymus has also been described.9 Cats with a median age of 10 years are usually affected. No breed predilection has been reported.3,7,8,24 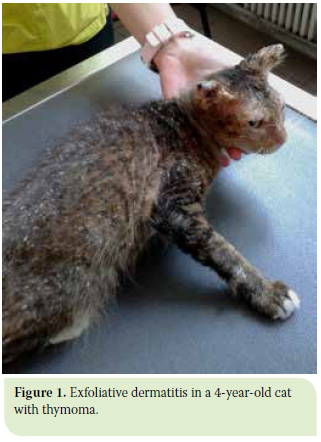 The thymus is not visible on thoracic radiographs in normal cats due to its location and atrophy. Radiographs are very useful in diagnosing cranial mediastinal masses; the presence of a soft tissue opacity ventral to the trachea could be the thymus or cranial vena cava, branchionocephalic trunk, mediastinal lymph nodes and left subclavian artery, although it is not possible to distinguish among these structures. The presence of a soft tissue opacity in the ventral aspect of the cranial mediastinum compressing the cranial lung lobes and resulting in caudal displacement of the cardiac silhouette and dorsal displacement of the trachea or pleural effusion are commonly visualized in thoracic radiographs (Figures 2 a & b, 3 a & b).3,7,8,16,18,20,24,30 Aspiration pneumonia and megaesophagus are rarely seen.8 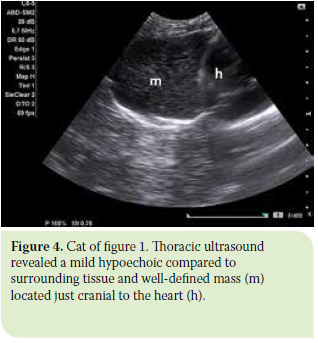 Ultrasonography provides information concerning the consistency of the tumour. Fine needle aspiration (FNA) and biopsy of the tumour can be performed under ultrasound guidance. The tumour can be solid or cystic.8,20,29 Common findings associated with the presence of thymoma as seen on thoracic ultrasonography include zones of mixed echogenicity with hypoechoic and anechoic areas identified in the cranial and mid-thorax or hyperechoic areas associated with the presence of cholesterol crystals (Figure 4).20,21,22,27,30 Other findings include the presence of pleural effusion or cardiac tamponade.3,7,20,21,24,27,31 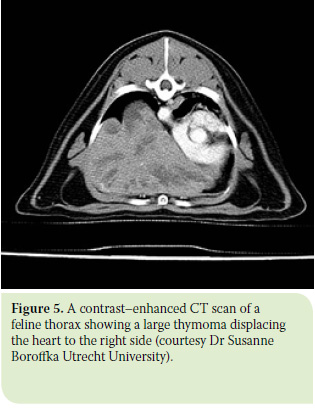 Computed tomography (CT) provides further information on the invasiveness of thymoma compared to plain radiography and ultrasound and has increased sensitivity but decreased specificity.8,14 Compression of the cranial vena cava, displacement of subclavian vessels, trachea or heart can be seen (Figure 5).14,30 Metastatic pulmonary nodules and lymph node enlargement can also be identified.14

Thymomas do not usually metastasize. Local spread to the lungs and lymph nodes has been reported but distant metastases are rare.3,5,7,18

Fine needle aspiration of thymoma performed under ultrasound guidance and cytologic examination of the aspirate may be diagnostic for thymoma, although it is sometimes hard to distinguish thymoma from lymphoma.4,21 Not uncommonly, negative or unrewarding results can be reported.4,9 On cytologic evaluation of thymomas, two types of cells dominate: thymic epithelial cells and small lymphocytes that exceed 80% and can be seen as single cells or within sheets.4,16,21,24,30 A mixed population of cells including mast cells, neutrophils, mononuclear cells, eosinophils, small lymphocytes and occasional lymphoblasts and erythrocytes may also be observed. The epithelial cells are polygonal, spindle or cuboidal with round to oval or reniform nuclei.4 The cytoplasm is usually lightly eosinophilic.3 Nucleoli are rarely seen, even though in some cases they can be large and prominent.3,4 The majority of lymphocytes are small, but medium and large lymphocytes may also be noted.3,4,8,21,4,27,30 A sterile, cholesterol- rich exudate obtained from a cyst located in the central of the tumour has been reported.20 Fluid aspirated from the thoracic cavity is milky containing small mature lymphocytes.12,16,24 In general, the cytologic examination does not always establish a diagnosis, but it is useful as a quick, initial screening examination.

Cats suspected for myasthenia gravis should undergo a few additional tests including electromyography, measurement of nerve conduction velocity and repetitive nerve stimulation at rates up to 30 stimuli/s.19 Muscle biopsy can also be obtained.19 However, definite diagnosis is made by measurement of acetylcholine receptor antibodies.8,19,24,25,29,31

In cats with exfoliative dermatitis, additional tests include skin scrapings to exclude the presence of ectoparasites or dermatophytes, tape strippings or ear canal mineral oil wash-outs.21,22,27,28 Skin biopsies are also obtained, which usually show orthokeratotic and parakeratotic hyperkeratosis, epidermal hyperplasia and inflammatory infiltration of the superficial and mid-dermis by lymphocytes, neutrophils and possible mast cells.21,22,27,28,32 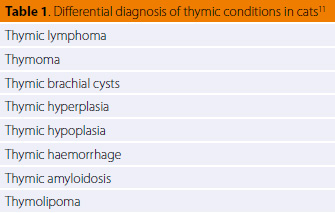 A list of differentials for feline thymic conditions is presented in table 1.11 However, the most common masses found in the cranial mediastinum are lymphoma and thymoma; it is important to distinguish between them because of the different treatment required.3,7,8,11,14 While in thymoma the treatment is surgical, in lymphoma it is medical.8 Thymoma is frequent in older cats;27 it shows slower progress than lymphoma and a better prognosis because it responds well to surgical excision. On cytology, a mixture of lymphoid and thymic epithelial cells are detected in thymomas, while neoplastic lymphoblasts are detected in lymphomas.34 However, cytologic examination is often misleading and the only way to establish a definite diagnosis of thymoma is by histologic evaluation. A list of differentials in cats with skin disease associated with thymoma is provided in Table 2.21,27 Definite diagnosis is based on history, physical examination and skin histopathology.

Treatment of thymomas includes surgical excision, chemotherapy or radiation.8,13,23,24 Surgical excision of thymomas or thymectomy is the treatment of choice for most thymomas.8,24,34,35 Thoracic exploration is also recommended to evaluate the invasiveness of thymoma.35 Generally, thymomas are commonly removed via median sternotomy, although in some cases excision is performed via lateral thoracotomy (Figure 6).8,19,20,22,24,34-36 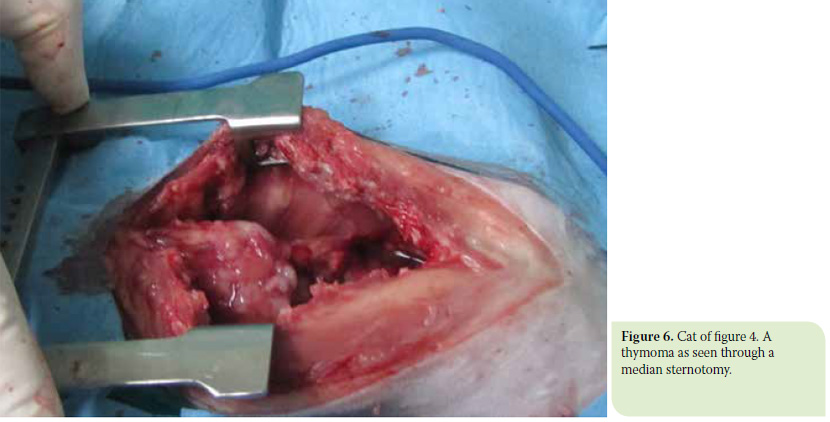 The tumour may also be an incidental finding on exploratory thoracotomy. 16,21,23 Median sternotomy is preferable for large tumours since it allows access to the entire thoracic cavity (Figure 7). Connective tissue is frequently adhered to the sternum and electrocautery is recommended for transection to allow visualization of the thymus.24,31 An initial visual inspection of the pericardium, blood vessels including cranial vena cava and internal thoracic arteries and pleura is recommended to determine the degree of invasion of the mass into the surrounding tissues prior to dissection.36 Vascular invasion can also be evaluated preoperatively using ultrasonography and CT imaging, even though the extent of the mass cannot always be estimated until palpation and visual inspection is effected at the time of surgery.8,35 The mass is removed with a sharp and blunt dissection. If the mass has extended to the pericardium, a pericardectomy should be performed.36 It is also important to isolate a single side of the mass. If the cranial or caudal sides of the mass can be resected free from the surrounding tissue, the thymoma can be mobilized more easily rendering it easier to visualize the heart and the large vessels.35 If the cranial border of the mass can be dissected free from the cranial vena cava, the dissection can be performed more safely so as to avoid laceration of this vein.35 The phrenic nerves should be identified within the tumour or surrounding tissues and be preserved.34,37 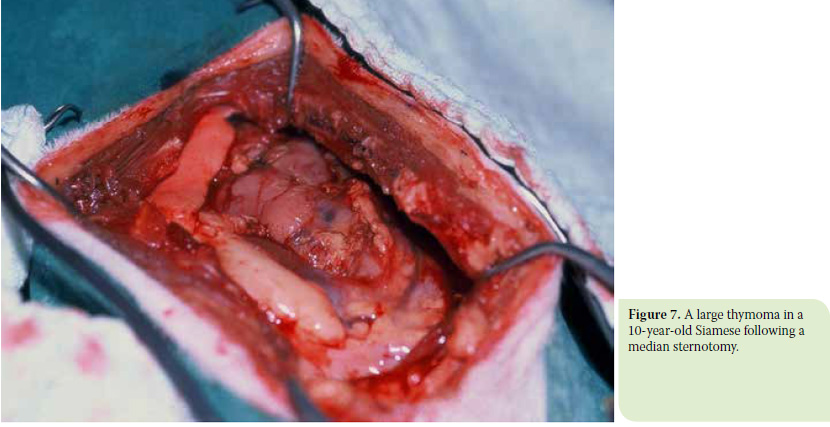 Lateral thoracotomy at the 5th or 6th intercostal space is preferable for smaller tumours (Figures 8 and 9).35,37 If it is not known preoperatively which side is more affected, a left lateral approach is preferred. 35

Before thoracotomy closure, a throracostomy tube is placed for the treatment of pneumothorax, and possible pleural effusion and haemorrhage is monitored. 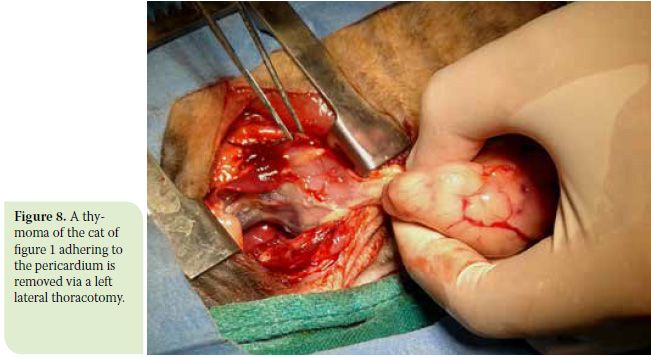 Postoperatively, cats are hospitalized for three to seven days.8 The thoracostomy tube is usually removed 36 hours after surgery.36 During hospitalization, cats are given analgesic drugs including bupivacaine (1-2 mg/kg through the thoracostomy tube), meloxicam (0.05 mg.kg SID po), fentanyl (2-6 μg/kg/h as a constant rate infusion) and antibiotics. The follow-up includes physical examination and thoracic radiographs every 3-6 months to detect potential tumour recurrence.37 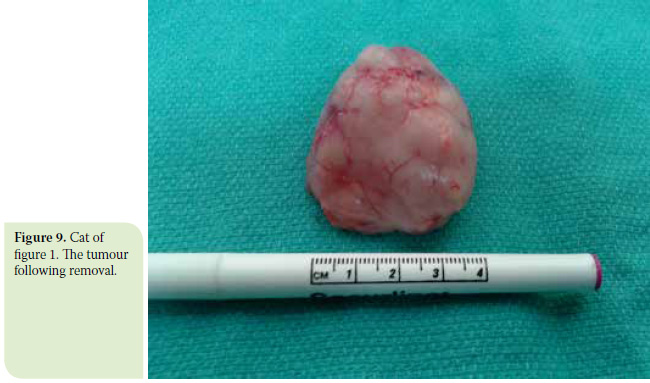 The routine use of adjuvant chemotherapy is not justified in cats.8,16,23 Radiation therapy has occasionally been used alone or combined with surgery with promising results.13,23 Treatment of myasthenia gravis includes the use of anticholinesterase drugs such as pyridostigmine bromide (0.5 mg/kg BID-TID po) and neostigmine alone (0.04 mg/kg/6 h im) or combined with prednisone (1.5-2 mg/kg BID po).19,24,25,29,31 In cats with myasthenia gravis associated with thymoma, thymectomy is considered as a useful treatment adjunct to immunosuppressive therapy.19,25,29,31 In a few cats, clinical signs of myasthenia gravis resolve following thymectomy.29,31

Histopathologic examination show thymomas to consist of a mixture of cells including thymic epithelial cells which can be round, oval or spindle in shape as well as small lymphocytes (Figure 10). The nuclei of epithelial cells can be round to oval with eosinophilic or clear cytoplasm and nucleoli are not frequently observed.2-5,7,9,11,17,18,22,24,26,28,30,32,33 The proportion of epithelial cells to lymphocytes varies in thymomas or even in areas of the same neoplasm.7,24 In two reported cases, the proportion of lymphoid and epithelial cells was similar.11 Mitotic figures are not frequent.3,4,9,11,20 Foci of haemosiderosis, necrosis, mineralization, oedema and gland formation may also be observed.3,4,7,24,30 A large proportion of thymomas are cystic. In humans, the criteria for classification of cystic thymomas include a) the presence of solid expanses consisting of a dual population of epithelial cells and small mature lymphocytes within the cyst walls, b) perivascular spaces and areas of medullary differentiation, and c) the absence of epithelial lining.7,38-40 Cystic thymomas have also been described in cats. The cysts are lined by flattened epithelial cells and small lymphocytes, which create a cell layer. Cysts may contain red blood cells and stainable fluid; Hassal’s corpuscles may occasionally be observed.2,3,7,8,12,17,20,24-26,29,30,32 Clear cell thymoma where neoplastic cells emerge as large clear cells comprising a uniform mass has been reported.2,3,7 Mast cells may also be present.3,24,33 Amyloid deposition has also been reported.11,30 Areas of necrosis and cystic cavities may be detected too.3,5,18 Additional tests that can be used for the characterization of thymoma include flow cytometry, immunocyto(histo)chemistry and electron microscopy. 7,9,30

Clinical staging of a thymoma is based on a) tumour invasion into the capsule and surrounding tissues on CT scans, b) intraoperative findings concerning tumour distinctive delineation from surrounding structures including mediastinal pleura, lymph nodes, pericardium and vena cava, c) the presence or absence of neoplastic cells in surgical margins as seen microscopically, and d) metastatic disease.13,41 This staging system may be used to recommend medical management and define prognosis in cats with thymoma.13 The staging system is shown in Table 3.41

The prognosis of feline thymomas that are non-invasive, non-metastatic and amenable to complete surgical excision is favourable.8,24 On the other hand, feline thymomas associated with paraneoplastic syndromes that cannot be controlled have a more guarded prognosis.28,29 However, in a few cases with myasthenia gravis and exfoliative dermatitis, the syndrome resolved following a thymectomy.21,24,29,31 The main prognostic factors associated with survival are shown in Table 4.8 Median survival for cats treated with thymectomy was reported to be 41 months.8,24

4. Rae C, Jacobs RM, Couto CG. A comparison between the cytologic and histologic characteristics in thirteen canine and feline thymomas. Can Vet J 1989, 30: 497-500.

22. Godfrey DR. Dermatosis and associated systemic signs in a cat with thymoma and recently treated with an imidacloprid preparation. J Small Anim Pract 1999, 40: 333-337.