> Anatomy – physiology
Pleura is the organ that covers the inner surface of the thoracic cavity wall and the outer surface of the lungs. It consists of the perietal and visceral pleurae between which a thin cavity is formed, called the pleural cavity. In a healthy dog this cavity is slit in shape and contains only a small amount of fluid which ranges from 1.5ml to 4.0ml. Pleural fluid is produced constantly by the vessels of the organ but it is also constantly reabsorbed by the lymphatic system thus its volume remains within the previously mentioned quantities. Protein concentration in the fluid as well as cell count is practically zero. Pleural fluid aims to allow the two pleurae to slide effortlessly against each other during ventilation. In each hemithorax the pleural cavity can be independent or may communicate at the point of the anterior mediastinal space with the opposite one.

The fluid that accumulates into the PC is distinguished, depending on the concentration of total solids and total number and type of nucleated cells, in a) transudate, b) modified transudate, c) exudate and d) neoplasmatic effusion.

> Indications for pleural cavity puncturing
In general, PCP is indicated for all cases that diagnostic imaging findings are compatible with fluid or air accumulation into the PC. But since it is a relatively safe technique that poses minimal risks, even when the clinician based upon dogs’ clinical presentation falsely estimates there is a pleural effusion (PE), it is advisable to perform it rather than not. Animals that are presented with severe inspiratory dyspnea and upon clinical examination muffled heart sounds or absened normal lung sounds detected and compatible clinical findings of upper airway disease is lacking that could explain inspiratory dyspnea it is advisable to perform PCP prior to any other diagnostic procedure especially imaging.

> Contradictions of pleural cavity puncture
As contradiction for performing PCP is encountered any disease entity that can not be addressed or its symptoms will be controlled by this procedure. Diseases included are hiatal hernia without concurrent pleural effusion, masses in the pleural cavity and pneumomediestinum. Moreover, PCP is contradicted in cases of pulmonary parenchymal diseases that by their nature have increased pulmonary parenchyma friability and in case of accidental lung laceration during the procedure may lead to extensive pulmonary parenchyma rupture and iatrogenic pneumothorax. These diseases include pulmonary cysts and to those characterized by diffuse lesions consisted to pneumonia or neoplasia.

Another potential contradiction is the small amount of fluid or air accumulated into the PC that makes it impossible to obtain it with safety or its removal does not correlate with the improvement of the case. In this case the safety of the procedure and the successful outcome are ensured mostly if it is performed under ultrasonographic guidance. Finally, severe contraindication is the presence of cough whereby the intense movements of the thoracic wall and hence the wide expansion of lung parenchyma during deep inspiration increases the risk of laceration of the latter.

> Materials
Since most of the dog cases that require PCP are presented with variable degree of inspiratory dyspnea is deemed necessary to supplement oxygen during the procedure. Method of oxygen administration depends upon animal’s mentality and clinic facilities.

Materials that should be available are divided into: a) those that are intended for preparation of the field, b) those necessary for performing the PCP and c) in case of fluid effusion in those that are required for sample transfer to laboratory for analysis (measurement of protein concentration, counting of total nucleated cells number, preparation cytological smears, culture for aerobic and anaerobic bacteria and fungi).

First category comprises of a clipper, antiseptic solution for surgical preparation of the skin and sterile gloves. Also it is recommended the area wherein the intercostals spaces through which the needle is going to be inserted to the PC are located to apply a local anesthetic ointment (lidocaine, prilocaine), in order to reduce any discomfort or reaction by the animal during needle insertion through the skin. Alternatively, subcutaneous tissue could be infiltrated by a local anesthetic agent (~1ml lidocaine 2%) (Figure 1).

To perform PCP a hypodermic needle 1,5 inches long and of 21G diameter or a butterfly catheter of 1.0 inches long and of 21G diameter, extension tube (if using a needle), a three-way stopcock, 2 syringes (in case of fluid since one is going to be used to obtain a sample) of 10 or 20ml or one syringe of 10 or 20ml and one of 60ml (in case of air) when amount fluid or air is expected to be high are required (Figure 2).

> Technique
For the safe implementation of PCP three people are required. One for restraining the dog, one to place and stabilize the butterfly catheter or hypodermic needle into the PC and one for operating the three-way stopcock and syringe during fluid or air aspiration.

The animal is preferred to be placed in a position in which it seems to be more comfortable. Thus it can be restrained as gentle as possible in lateral recumbency or in a sitting or standing position. The author prefers to restrain the animal in a standing position (Figure 4). Lateral thoracic wall is clipped in an extended area around the intercostal space through which has been chosen to insert the hypodermic needle or butterfly catheter into PC. Specifically, the area that is clipped is extended at least at a distance equal to the length of the width of three intercostal spaces anterior to the 7th and posterior to the 9th intercostal space. The upper limit of the clipped area is extended to the level of the transversocostal facet of thoracic vertebra and the lower limit just above of the sternebrae (Figure 5). If it is known that it is an air effusion and the dog is in a standing position the area clipped could be restricted regarding its lower limit since air accumulates at the upper lung fields. The opposite is followed in case of a fluid effusion. If PCP is performed prior to diagnostic imaging investigation of the case, which would have differentiate the type of the effusion, the area is prepared by following the above mentioned general rules regarding the upper and lower limits. Usually, if PCP is done prior to diagnostic imaging investigation it is preferred to be performed through the 7th to 9th intercostals spaces both right and left. As mentioned above an ointment with local anesthetic is applied (Figure 6a) or a subcutaneous lidocaine 2% infusion is performed (Figure 6b) and few minutes are allowed to pass by. Clipped area is aseptically prepared (Figure 7). 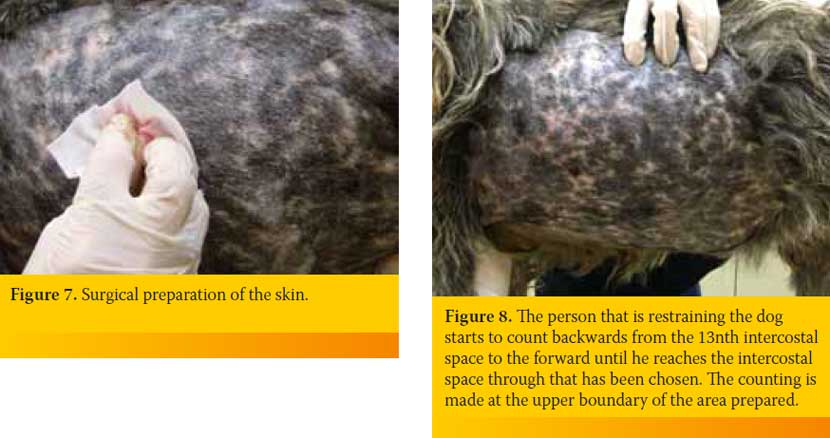 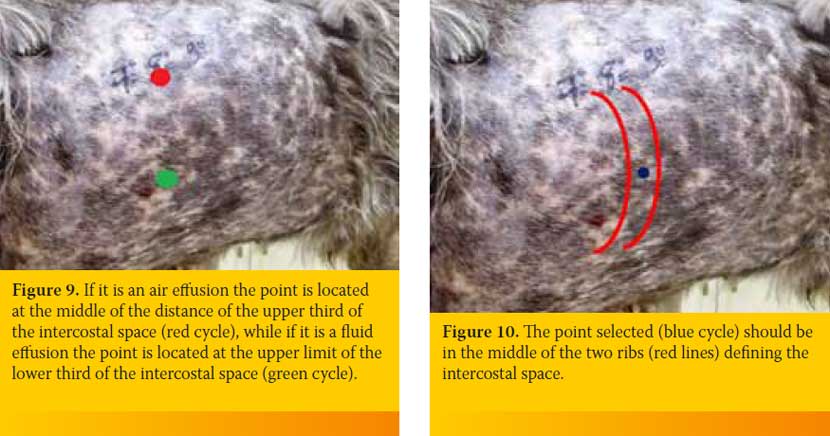 After identifying the selected intercostal space the person who handles the butterfly catheter chooses the exact point through which the catheter will enter into the PC. The height of the point chosen is based on the type of effusion. If it is an air effusion the point is located at the middle of the distance of the upper third of the intercostal space, while if it is a fluid effusion the point is located at the upper limit of the lower third of the intercostal space (Figure 9). Also, point selected should be in the middle of the two ribs defining the intercostal space in order to avoid rupture of vessels and nerves located to every rib (Figure 10). The butterfly catheter prior starting the procedure should already be connected to the three-way stopcock. In one of the three-way stopcock orifices a 10ml or 20ml syringe is attached (Figure 11).

The butterfly catheter is hold in a way that after penetrating the skin and the intercostal muscles is inserted perpendicular to the PC (Figure 12). Then it is redirected so that the longitudinal axis of its needle to be located parallel to the thoracic wall (Figure 13), aiming to reduce the possibility of iatrogenic pulmonary parenchyma laceration. The butterfly catheter needle while being within the PC it can be redirected, by moving clockwise provided that its longitudinal axis is always parallel to the thoracic wall (Figure 14). The hand of the person handling the butterfly catheter is allowed to bear against the thoracic wall so that it follows its movements during inspiration and expiration achieving better stabilization of the needle into the thoracic cavity. Immediately after the entry of the needle in the PC gentle negative pressure in applied to the syringe. If there is air or fluid effusion negative pressure will cease and the syringe will begin to fill with air or fluid (Figure 15).

If it is a fluid effusion as soon as the 10ml syringe is filled the three-way stopcock is closed, the syringe is removed and a new one of the same or higher volume is fixed in place depending upon the volume of fluid expected to be aspirated. The content of the first syringe is splitted as soon as possible to the shipment containers (for cytological evaluation, culture and biochemical analysis), while cytology smears are immediately prepared (Figure 16). 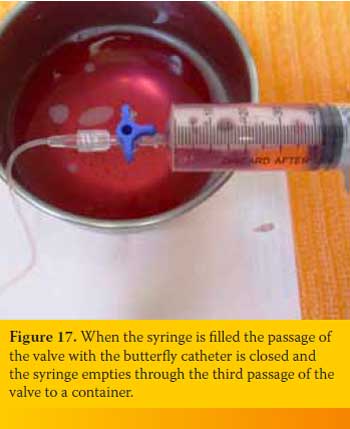 Suction is continued up to the point that the syringe is no more filled with fluid or air or until the one who handles the butterfly needle fills the lung parenchyma to “scratch” against it. Every time that the syringe is filled and should be emptied the person handling the latter does not have to disconnected it from the three-way stopcock, instead the passage of the valve with the butterfly catheter is closed and the syringe empties through the third passage of the valve to a container (Figure 17). If no more fluid or air can be suctioned but the animals’ condition has not improved significantly the procedure is repeated after penetrating the PC from a different intercostal space. The same applies if blood appears suddenly in the aspiration system.

The PCP should be performed through the left as well as through the right hemithorax since the two pleural cavities do not always communicate or the amount of air or fluid is not equally divided into the two sides. This does not apply for cases where prior to PCP thoracic radiographs have revealed that the effusion is contralateral. Immediately after completing the procedure thoracic radiographs should be performed. The time point is considered as the most appropriate because the improvement of lung function and consequently the oxygenation status have been improved so that the animal can withstand the stresses of handling during radiography and in addition imaging of the lung parenchyma and of the other thoracic structures is better as not obscured by the effusion.

> Causes of technique failure and how they can be confront
In some cases despite the confirmed radiographic presence of fluid or air accumulation into the PC it is impossible to aspirate a satisfactory amount. The more common causes are:

> Potential complications
Despite the fact that in small animal medicine the exact incidence of complications related to PCP implementation has not been recorded, however all authors agree that it is possible to exist. Among the most usual are encountered:

To limit the possibility of potential complications PCP is recommended to be performed under ultrasonographic guidance. Slow evacuation of the effusion or up to the point that inspiratory dyspnea improves is also recommended for cases suffering from chronic pleural effusions. The latter applies also in cases of hemothorax since part of the effusion can be reabsorbed by the vessels of the pleura improving the value of the hematocrit which in such cases is usually moderate to severe lowered. In addition in absence of ultrasonographic guidance the PCP is restricted between the 7th and 9th intercostal spaces eliminating the incidence of complications.

> When a thoracostomy tube place ment is advised?

For thoracostomy tube placement please refer to the page 59 of this issue. 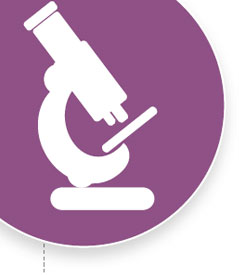