Corneal lesion in a dog 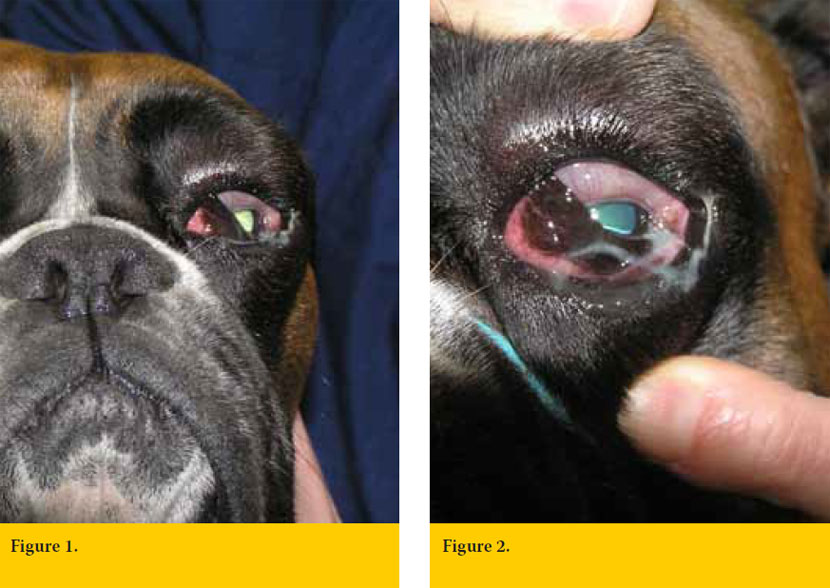 Corneal lesion in a dog.

1. How would you describe the ocular lesions? (Fig 1 and 2).
The main ocular finding involved the cornea with a central, deep, predescemetal round-shape ulcer with vertical lips. Note the transparency of the bottom of the ulcer, where the Descemet layer lies. The ulcer’s edge and the rest of the cornea, lack transparency due to stromal edema. Intense corneal superficial vascularization is also detected indicating chronicity. Thickening and hyperemia of the conjunctiva and nictitating membrane are also observed. Finally, there is mucopurulent discharge in the conjunctival sac.

2. Is there a causative relationship between the corneal lesions and the removal of the third eyelid’s gland and which exam would you recommend for the investigation of this relationship?
Removal of the nictitans gland can result in keratoconjunctivitis sicca (KCS)1,2,3. This in turn, predisposes to both creation of corneal ulcers and inhibits the healing process, in ulcers caused by any aetiology (e.g. traumatic ulcers)2,3. In present case the presence of mucopurulent discharge - though the ulcer is “clean” and does not seem infective-refers probably to KCS. The owner of the animal did not mention any previous problems in the eye until last week. The most likely scenario is the pre-existance of subclinical KCS which perdisposed in appearance and/or contributed to the deterioration of the ulcer, although acute KCS with concurrent ulcer formation can not be excluded. The diagnostic test of choice to investigate the possible relationship between ulcer and KCS is the Schirmer tear test I (STTI), which is part of the complete ophthalmic examination3. In this case the STTI measurement was 4mm/min (normal values:> 15mm/min).

3. What treatment would you suggest (medical and/or surgical)?
KCS and corneal ulcer should be treated concurrently3,4. For KCS, cyclosporine ophthalmic ointment 0.2% (Lacrimmune ® ophth. oint., Intervet, topically 2 times daily) and carbomer gel-ocular tear substitute (Dacrio gel ® ophth. gel. Alcon, locally initially every 2 hours) are administered. Note that use of cyclosporine is not contraindicated in ulcerative keratitis5. Furthermore an antibiotic was administered topically in order to prevent ulcer contamination (tobramycin -Tobrex ®, ophth. drops, Alcon, topical, 4 times daily). The ulcer must be treated surgically using one of the tissue transplantation techniques for corneal restoration4,6. In this case, a pedicle and not free corneal graft was prefered in order to ensure blood supply and ulcer healing, considering the negative environment due to KCS. Additionally, a corneoscleral graft was preferred instead of a conjunctival one because of the central location of the ulcer, in order to restore the transparency of the cornea in the visual axis of the eye. Thus, the corneoscleral transposition technique was applied7 (Figure 3). One month postoperatively, when the stitches were removed, the graft was well embedded and vascularised (Figure 4). The STTI was 16mm/ min. The administration of ophthalmic 0.2 % cyclosporin ointment was continued and dexamethasone administration was initiated (Maxidex ® ophth.drops, Alcon topically 3 times daily for 15 days) for postoperative keratitis and vascularization control. Three months postoperatively the cornea was restored almost completely (Figures 5 and 6). The STTI was 18mm/min. Lifetime administration of cyclosporine ophthalmic ointment 0.2 % was recommended, 1 time daily. 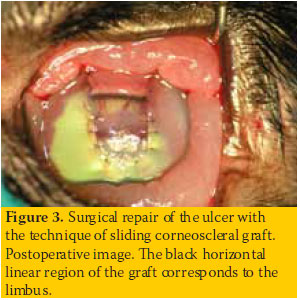 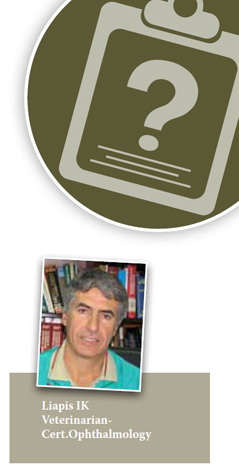